The train trip from Latina to Rome, Rome to Padua and Padua to Bassano was uneventful except for Scott being sick as a dog. He was not much of a conversationalist-he slept most of the day. So I wrote and read and watched the scenery pass by.
Bassano del Grappa is a picturesque town on the banks of the Brenta River. It sits at the base of the Dolomites, a majestic mountain range that themselves sit at the base of the Alps. I love this town. We traveled through Bassano on a motorcycle trip last year and vowed to return. 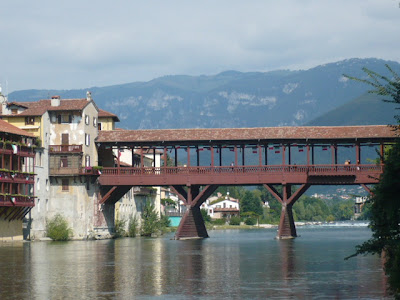 We checked in to Hotel Brennero, probably the most comfortable hotel we’ve had this whole trip with a spacious room and a shower AND bathtub. 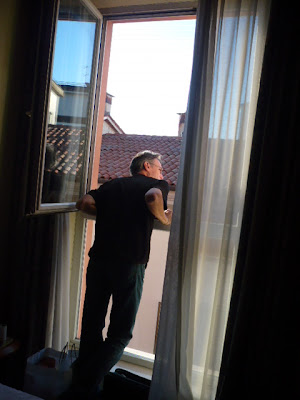 At 75 Euros a night (about $100) it was also one of the most reasonable-in comparison we paid 79 Euros a night in Milan for a cramped-albeit clean-hostel/hotel room in a part of town packed with sex shops and massage parlours! There was a big celebration going on in Bassano the Sunday afternoon we arrived. Actually, it was just winding down, but some folks were determined to party the night away…right under our 3rd floor window. Scott immersed himself in the bathtub while I unpacked a bit and then, amidst singing and hollering, we went to sleep. The next morning Scott was feeling much better and we set out to explore the town. Bassano is set up very logically with most of the concentration of shops and city offices in one area. It is very easy to get around on foot…indeed most of the locals seem to walk or ride bicycles around town. 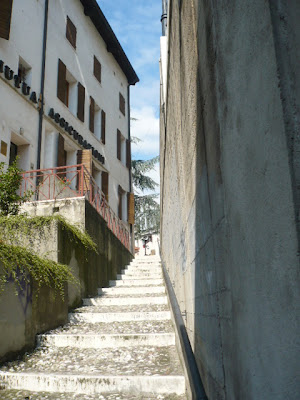 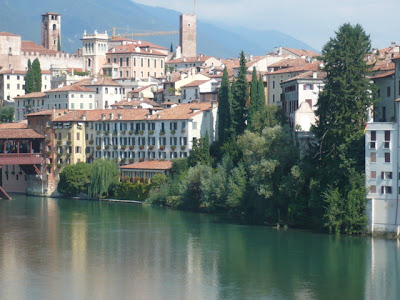 The town is known for its grappa-a spirit made from the skin of grapes. You’d think we’d had enough with all the alcohol in Latina, but we had already planned on touring the Poli Grappa Museum. It was fascinating, showing some types of very early distillers (stills) and, after tasting several varieties, we bought a few bottles to bring home. There were great food shops with porcini mushrooms-dried and fresh, several types of honey and burlap sacks full of beans, peas, lentils and rice. There were a few cartography shops-Bassano having one of the earliest printing companies in the area. The papers and cards were beautifully printed with centuries old designs. And the gelatarias were some of the best we’ve encountered. We had a pine nut gelato that rivaled any gelato we’ve ever eaten.
Bassano’s houses a UNESCO site with one of the Italian Military War Memorials atop Mt. Grappa (about 30 km away). We rode up Mt. Grappa last year (a gripping ride up the side of a very steep mountain which, to Scott’s chagrin, pretty much made me swear off motorcycles) and saw the Memorial from afar. The site entombs about 30,000 soldiers, with over 12,000 being unknown soldiers. The town itself has shrines and some will break your heart. Scott and I were walking down a beautiful tree lined boulevard overlooking the river when he pointed out flower pots planted with cyclamins at eye level on every tree. I looked closer and saw they were mini memorials. The flower pots were attached to ceramic plaques that encircled the tree trunks. On each plaque was the name of a fallen soldier. What was striking however, was a noose painted under each soldiers’ name. The men named were hung on this street 60 odd years ago. It was a sad reminder of the cost of war.
We spent 2 days and three nights in Bassano and it was not near enough.﻿ We walked all over town and shopped and ate some great meals.  Scott felt better every day and by our last day in Italy we realized it was not a hangover, but he was battling an upper respiratory infection. We stopped in a farmacia in the center of town and I told them my husband had a sore throat.  They brought out some propolis spray and a homeopathic remedy for sore throat/chest congestion. Although I felt we were a few days late for using these, I bought both and he took them on the spot. These shops are actual pharmacies and you can have a prescription filled here, but it's nice their first line of defense is homeopathic. We had to get up real early our last morning in Bassano to catch a 5:30 train to Cologne, Germany.  We were on trains for 12 hours that day. It gave me time to read a bit, relax, catch up on writing.  I know I've said it a hundred times, but I do so love the trains. 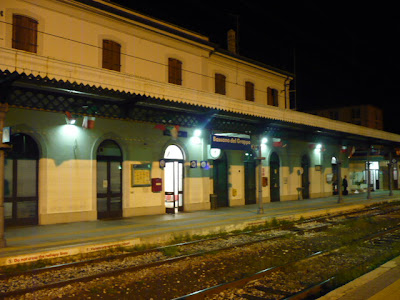 An empty train station at 5:30 a.m.
The ride from Bassano to Cologne was magnificent-first through the Dolomite Mountains and then through the Alps.  It was chilly outside and the train was cozy.  We passed thickly forested mountain tops and big lakes. Sweet alpine towns and industrial areas.  We took lots of pictures out the train window. 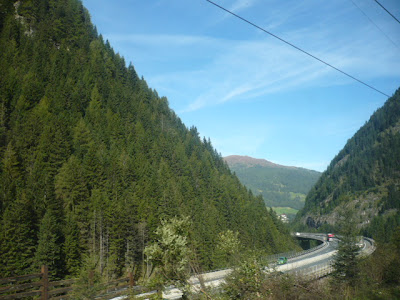 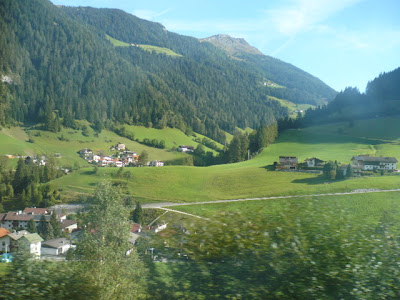 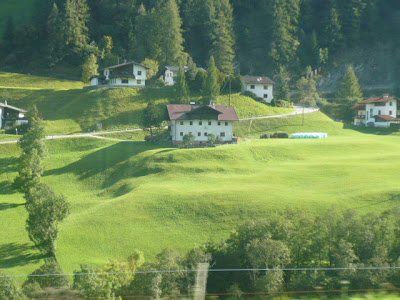 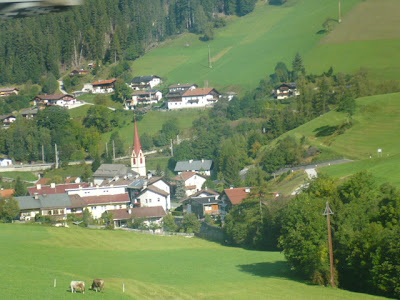 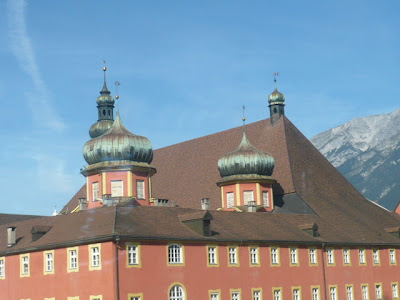 At 5:30 that evening we entered the Cologne Central Station. 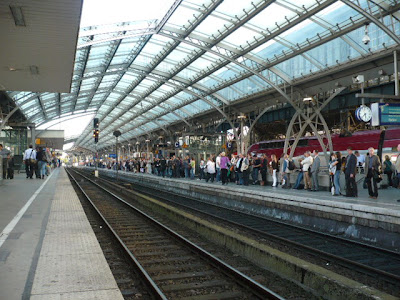 We were here to spend 2 days with Lothar Esser and his family: his wife Renate and his two sons; Sebastian, 14 and Lukas, 12.
Posted by diane at 11:38 AM