7 Sept 2010 15:02 Enroute to Paris on EuroStar
Our plans this morning to pack, deposit our belongings at the train station and take an open top bus to Abbey Road fell apart rather quickly after arriving at the train station. No sooner had we walked inside than the heavens opened up. There went the idea of an open top bus…but still…After discovering that it cost 8 Pounds PER BAG to check our bags early, we totally abandon our plan. In reality, it was finally abandoned when Lily said, “I will see Abbey Road NEXT TIME I am in London…” Oh  yes, I was glad to hear that she was making plans to return. So we sat at a café and ate lunch, sandwiches and crisps, and wandered around the station. Bought some postcards and stamps at a bookstore and sat at another café drinking coffee while writing them out. I discovered I had free internet at the station, so posted to the blog and checked mail. Now, the train is hurtling through the French countryside toward Paris. My seatmate is a lovely lady on her way to Paris for a holiday to see her daughter and grandchildren (and new puppy!).

We are already through the “Chunnel”-the Channel Tunnel- and should be in Paris in a bit over an hour twenty. I think we are all a bit worn out…we’ve been keeping late hours and, Scott and I at least, wake early. The meal last night at The Alcocks was probably the healthiest we’ve eaten thus far and I am not expecting Paris to be healthier…I am looking forward to crepes and macarones, good cheese and wine. I explain this food away with all the walking we are doing. It feels good.

Paris Tuesday 22:48
There is a metro strike going on in London. Luckily, most lines heading north were in operation as we headed for the main train station this morning. When we arrived in Paris we were told that not only were the Metro workers on strike, but also bus and rail workers. We stood in the train station wondering how we would get to the hotel on the other side of Paris. We took turns staying with the bags and going downstairs to the bathroom. The metro lines were downstairs also and Scott noticed that there was quite a bit of activity going on even though some parts were blocked. The Metro was indeed operating at a lesser capacity, but enough for us to get where we needed to be. What we didn’t expect was that the lines that were open were so packed as to be almost unusable. After taking one train to a station a few stops down, we waited to get on another. The platform grew busier and more crowded as the time for the train drew nearer and when it came time to board, the train doors opened and the crowd surged forward. The passengers trying to get OFF the train had to push through the crowd to exit and by the time we got to the doors there was no where to go…we watched the doors close in front of our faces and the train pull away. No bother as there was another train in 8 minutes. We settled in, this time right in front. When the next train arrived, the platform was once again a pulsing mass of people. We were glad to be in the front of the crowd. The train arrived, the doors opened and the crowd surged. I pushed in as passengers departed. Lily barely squeezed in behind me and then the crowd pushed again and Scott, with his large backpack tried to get on, but his backpack wouldn’t clear the doors. As the doors began to close, I saw him at the edge of the platform looking in at us. He stepped over to the open train window and called in, “I’ll meet you at our stop…and I have the wine!”
The subway train was so tight we couldn't move-and it was that way through most of the next 10 stops. Lily and I finally got off at our stop and sat on a bench waiting for Scott's train. It came along shortly and we were glad to all be together again.  Just one more train to get on which would take us close to our hotel. After checking in we headed out for dinner across the street. Lily and I had  duck and Scott had veal. For dessert we shared a creme brulee and a tarte tatin.  Huge servings of dessert and luscious. Lily was wiped out and wanted to stay in for the evening (it was already after 9), so Scott and I headed out. Our hotel has a lovely view of the Eiffel Tower so we headed in that direction.  It was a lovely walk, the streets were mostly empty and the evening cool and overcast. The Eiffel Tower is across the Seine River from our hotel and we just walked to the bridge and I took a pic of Scott with the Tower in the background. 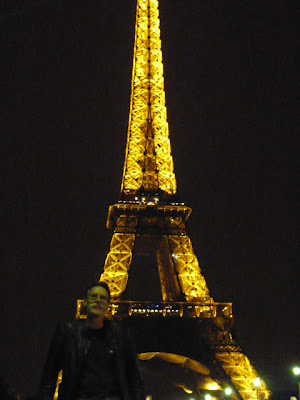 As we were walking back it began to rain and it just seemed appropriate somehow.  We strolled hand in hand through the dim streets happy to be here.
Wednesday
For some reason we slept late this morning.  The first time that has happened. So by the time we showered and got out of the hotel it was almost 10. First order-COFFEE!  We went to a cafe a few steps from our hotel and had coffee (Lily, tea) and then sat and sat. We would have had breakfast had the waiter showed back up or at least another latte, but we never saw him again. Scott walked into the cafe to pay somebody-ANYBODY- for our coffee while Lily and I went back to the hotel to grab jackets as it was chilly.  We caught back up to Scott and found another shop to grab breakfast and headed back to the Eiffel Tower so Lily could get pics.  The sky was getting darker and darker and just as we were getting a photo of us with the Tower behind, it began to pour. 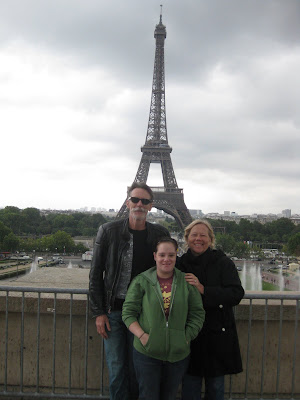 We walked across the Seine and stood beneath the tower. Pretty impressive feat of engineering. 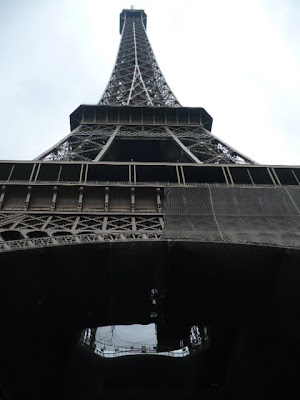 We headed east to the Champs Elysees. A picturesque walk with so much greenspace (and lots of traffic!). Passed this interesting building that was covered entirely with living plants of an amazing variety. 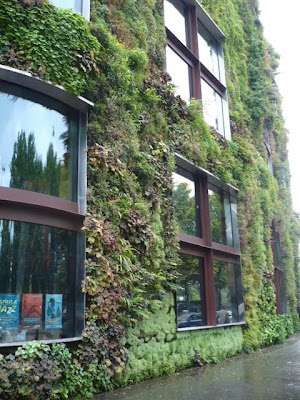 We dropped Lily back at the hotel to tend her blisters and begin her packing as she heads home in the morning. Scott and I ventured back out to see more of the city.  The difference between London and Paris is striking...London was surprisingly clean, Paris seems tattered. The people here do not smile or engage really in any way.  In London everyone wants to tell you a story.  Scott and I finally encountered a sweet, happy woman in a bakery when we bought lunch/dinner to bring back to the hotel.  She was helpful and she seemed thrilled that we were so enthralled with the goods on the shelves. Our time last year in the south of France was wonderful, the people warm and content.  I can't help but think it must be Paris that makes these folks so annoyed with everyone and everything. A terrible blanket statement, I know and there are probably many wonderful people living in Paris, but all 3 of us noticed how few smiles we've seen.  So many thanks to the lady in the bakery with the sweet smile. The quiche was wonderful, and the desserts really shined! But your smile warmed us on this wet, chilly day in Paris. 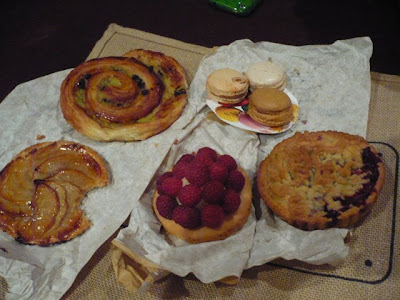