Cologne and Heidelberg and HOME!

Cologne is a big city; but from Bergisch Gladbach, where Lothar and Renate live, it looks like it is growing out of a thick forest. Lots of green space. 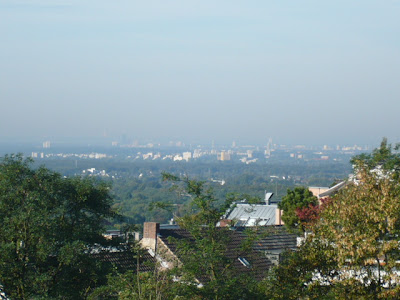 Lothar took us on a "tour" of Bergisch Gladbach...an old paper mill (a town with lots of trees and water is perfect for the paper industry) where we saw paper actually being made-and brought some home, a castle built to resemble Versailles-but on a smaller scale (and it is now a SPA!), and a hotel which was once a private home that LOOKS like a small castle. 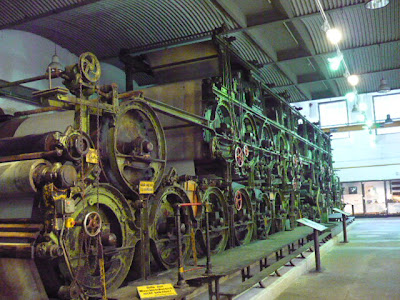 An original paper machine from the early 1900's. 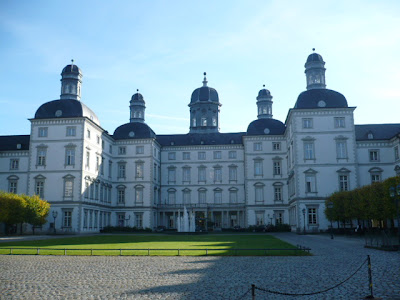 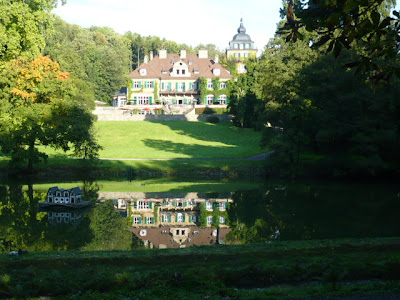 Schlosshotel Lerbach
The town is like a movie set-so much green and some very cool architecture. Houses are tall and narrow, small footprints with lots of square footage, much like in Rotterdam. Here in the States it seems we like SPRAWL, especially here in Texas, but then we have lots of space (or the illusion of). Lothar and Renate's house was so comfortable. They incorporated many interesting touches when they had it built. They have two sons; Lukas,12 and Sebastian, 14 who kept us laughing! 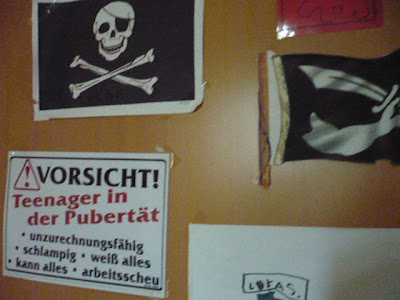 The door to Lukas' bedroom. "Danger! Teenager in Puberty!"
One afternoon Renate and I were sitting outside on the patio having coffee. Sebastian came out and was visiting with us when Renate realized she had to pick up Lukas. She told Sebastian, "Learn some English from Diane..." When she left Sebastian looked at me and said, "I'll teach you German!" and for the next 30 minutes we walked around the yard and he taught me the German words for things and I taught him English. It was a blast and we were both surprised how many words were similar. 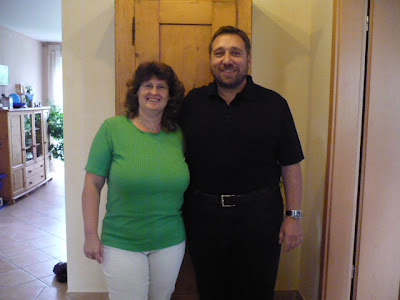 Renate and Lothar Esser
We had such a great visit with Renate and Lothar. Renate walked me to her parents' home, just a few doors down and I got to "tour" their house. The backyard was like an arboretum, with so many different varieties of flowers, shrubs and trees in addition to a pond and a sweet, tiny "garden house" where they sometimes spent evenings visiting with friends. It was very interesting to note that Lothar and Renate both grew up in this town-in Renate's case just a few doors away-and how common this is. They still, on a regular basis, see friends with whom they went to elementary school.  You just don't find that much in the States.
The train ride from Cologne to Heidelberg was sweet. We traveled for a great distance along the Rhine river and it was fascinating to see how many castles were built on the hills overlooking the river. There were many fields of cropland going straight up hills and I was surprised to see some of the plantings were vertical, not horizontal! Excuse this pic as it was taken from the train window. 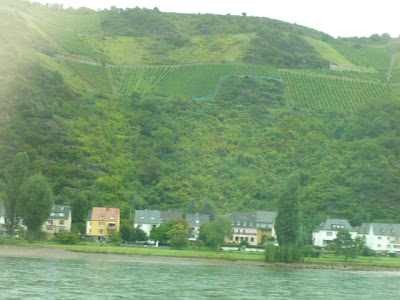 It also surprised me how close these houses were to the Rhine!
We got to the Heidelberg train station and had to catch a bus to our hotel. I was in Heidelberg to work, so the hotel was not of my choosing.  We were booked at the Heidelberg Holiday Inn and it was a way out of town. After checking in, we asked about a place to eat and the guy at the front desk told us, "There is one place-a Croatian reaturant about 3 blocks away." and he pointed out the door across the street to the woods. Oh, really? We took off, strolling down a sidewalk that wound through the trees and sure enough, there it was, Restaurant Makedonia. Not Croatian, but Macedonian food and it was incredible!  We ate dinner there three nights in a row and every night marveled at how everything was perfectly cooked and how large the portions were. By the third evening, when we walked in the door, the waiters laughed. I was working with Army doctors and the first day was brutal...we met at 6:30 for breakfast, and after a short drive to the base we were working by 7:15. It was after 6 when we finished and I was exhausted when I got back to our room. Scott had been at the track all day with Lothar, who had driven down with Lukas from Cologne. We ate dinner at Makedonia and turned in early, as I expected the next day to be a copy of the first. Thankfully, we finished up around 1 in the afternoon, so when I returned to the hotel Scott and I took off to see "Old Heidelberg". What an afternoon. Strangely, Old Heidelberg felt so familiar. I kept thinking (and feeling) I had been there before. It was a dreary, drizzly day and we walked the cobblestone streets arm in arm, sometimes with our hoods pulled up, enjoying our time alone immensely. Our trip was coming to an end and we were trying to draw our time out. 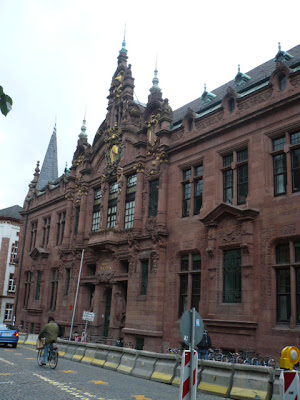 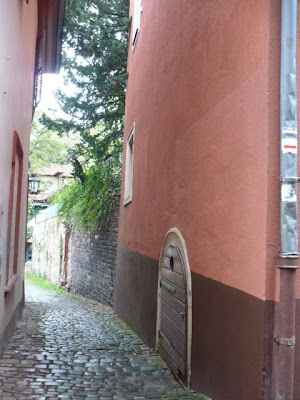 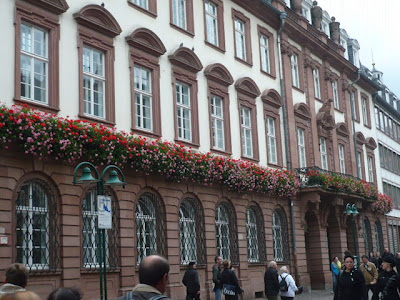 We went to a mini Renaissance Faire and kept thinking of our daughter Molly who, along with her husband Keith, is a Rennie devotee. We ate a snack of spit roasted pork on a bed of saurkraut (we were in Germany after all), but the cool thing was it was served in an edible bowl which tasted like an ice cream cone. 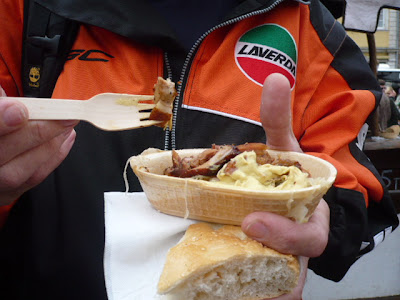 Then we got coffee and cake from another booth. I thought this set-up was ingenious! A shelf with Melitta type coffee pour-throughs sitting over holes in the shelf and coffee cups placed beneath. You've got to see it to understand: 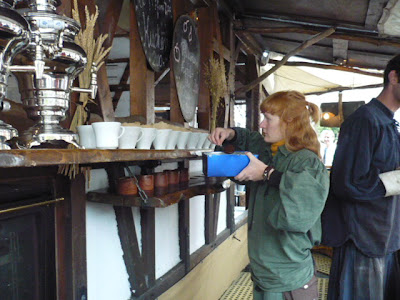 The hand made pottery cups sat in recesses on the bottom shelf. It was an entertaining faire and great for people watching. An intriguing wood fired oven: 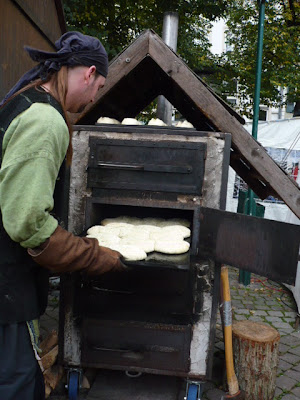 Obviously VERY portable with those heavy duty casters!
We walked the 300+ steps up to the castle and I was struck once again by an eerie familiarity. 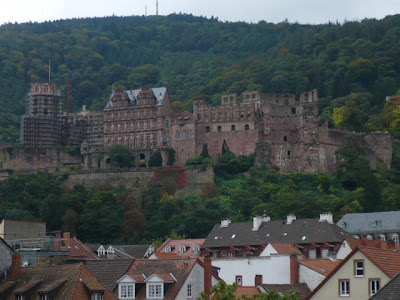 The castle from below. 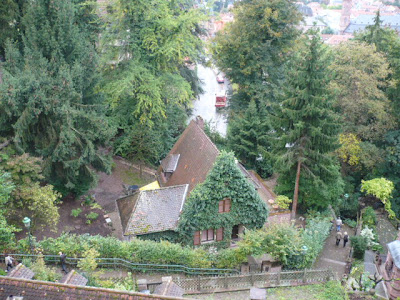 Taken from the steps up to the castle...a bit more than halfway there! 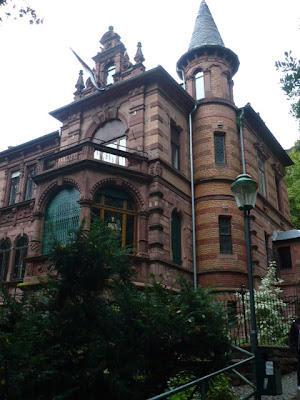 A cool house on the way to the castle 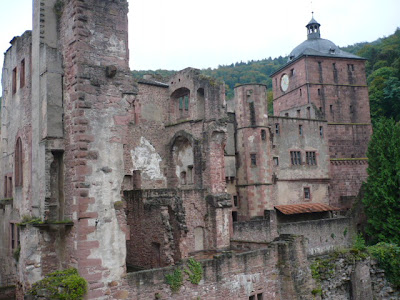 The castle was huge.  This is only a small part of it. 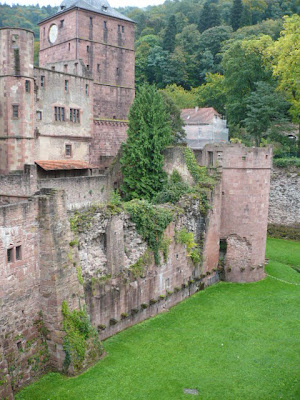 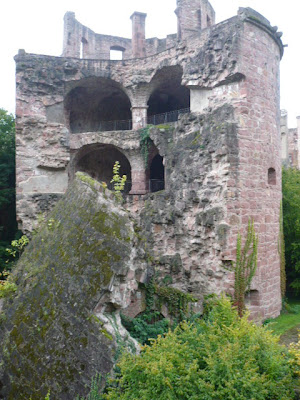 I thought it was cool how, because this part of the tower broke off, you could glimpse inside. 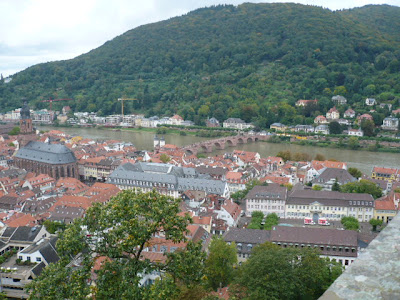 The view from the castle looking down on Heidelberg and the bridge over the Neckers River.
It was lovely-even though partially in ruin-and the rainy weather seemed somehow appropriate.
We went back to the hotel and packed our bags to head to Paris to spend one night before flying home.
Our night in Paris was uneventful. A bland hotel near the airport and an average dinner. We got to the airport and while checking in our bags were told that the tickets we were holding were invalid and we did not, in fact, have a flight! Excuse me? After more than an hour in line, and already too late to catch our original flight, we were booked on a direct flight home. We could spend our time leisurely, going through security and drinking coffee. Our rebooked flight was only partially full, so they gave us a seat in an emergency aisle (these seats usually cost 70 Euros more!) so Scott could stretch out. It was a pretty comfortable flight and we were glad it worked out as it did, even if we did have a moment of initial panic!
Now, home three weeks, it has been non-stop.  Not only playing catch-up, but with all sorts of new developments. 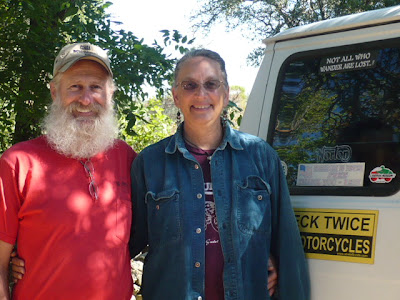 Cal and Leslie, our "vagabond" friends, who stopped by for a visit a few days after we returned from vacation.
We have had guests at the house 2 1/2 weeks out of the last three and now have a full house for what looks like the next 4-6 weeks. We have a sweet 23 year old, Honor Holly, living with us until she starts school in November. Honor was born in this house and moved away when she was about 2 years old. It has been fun having her around and she keeps us laughing with her sunny outlook on life. Lily has also moved back home after two weeks in Dallas.  Lily and Honor are crazy funny together and it is working out well to have them here at the same time. They occupy the entire second floor of the house-each with their own bedrooms-and I try not to even venture up there. They help us out around the ranch-they have been baking cookies most all day today for the Harvest Classic and will be washing dishes there all day tomorrow!
We got a baby pig this morning.  We have named him Bacon and he will eventually feed us. At this point he is as cute as can be! Love the curly tail! He's pretty friendly and snorts if you scratch his nose. 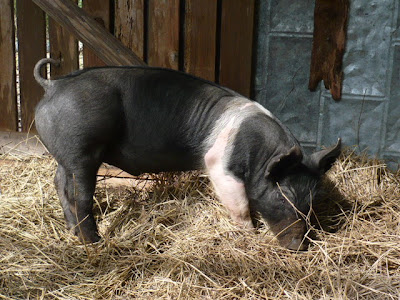 Next week, we will set up a bee hive.Yeah, life moves on here at the ranch and at this point it sure doesn't feel like a "Half Fast Life"...it feels like full speed ahead! But man, is it fun. Can't imagine it any other way!
Posted by diane at 3:24 PM

nice write-up about your trip. You are so lucky having seen all these places even I as a European haven't been to. Thanks for sharing, really cool reading!

Oh - and thanks for the kind words about us and your stay. We really deeply enjoyed having you around, you were brilliant guests. Any time you come to Europe, we would love to have you with us for some more days if possible.