After leaving the beach, Nuncio drove to a house close by where a number of his friends were having a get together. We met his girlfriend Rita and many other folks and we were immediately drawn in and given seats at the large table. There was much talk and attempts to communicate. They were friendly and happy and brought us out plates with chocolate ice cream on them. Scott took a bite and told me, “Chocolate but something else…” I tried it and grinned, “Chocolate and chilis!” Everyone smiled and nodded their heads. We were soon back in the car heading towards Stella’s home. As we sped along, I kept seeing fennel growing by the side of the road-not the bulbous vegetable, but the herb. When we got back to the family compound, I walked down the street hoping to pick some. I had walked about a block when I saw Ramona behind me. I turned around to join her and we walked about a block the other way. She told me that during a 3 week vacation to see Claudio’s parents when Daniela was in kindergarten, the school in Houston was threatening a truancy charge, so Ramona enrolled Daniela in kindergarten in Latina for 3 weeks. School was from 8-12 and then 2-4 and Daniela would attend for only the morning hours. It was kindergarten so the language barrier was not much of a problem-play is play in any language. Daniela loved it. The Latina school signed a paper showing attendance and Houston was satisfied.
By the time we made it back to the house, it was time to head next door for dinner. It was dark by now and as we walked down the steps to the driveway separating the two houses, I could see the glow of the fire on the grill. An ingenious design, the grill was simply a masonry platform built up along the front edge only one brick high. The back was much higher and the fire was built along one side of the tall back wall and the hot coals were shoveled under the cooking surface-a metal grate that stood on legs about 6” high. The entire thing was waist high and from the other side just looked like a brick wall. As we arrived the chicken pieces and sausage were just being removed from the fire and mountains of steaks were ready to be grilled. We stood around the grill drinking red wine out of plastic cups. 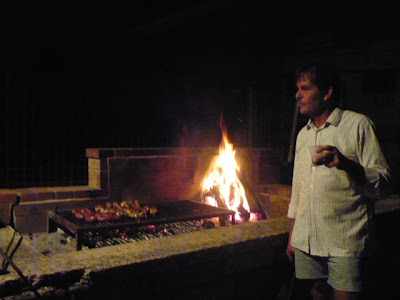 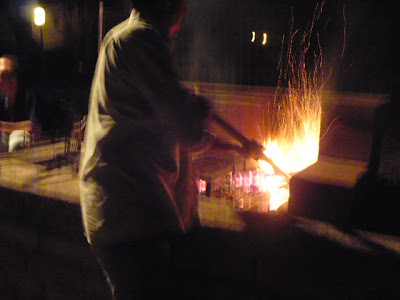 Even though this pic is out of focus, I like it! 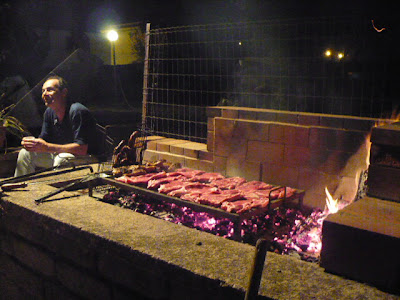 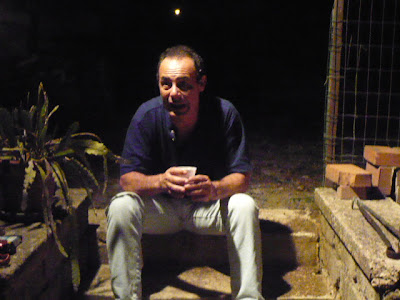 I had brought along a jar of my chipotle bar-b-que sauce to share and I carried it to the kitchen. Stella, Mariuccia and a beautiful, young pregnant woman were all standing in the kitchen talking. I was introduced to Sara, Umberto’s wife. Umberto is one of Claudio’s nephews. Soon the food from the grill entered the dining room on huge platters and crusty bread, bowls of green salad and marinated roasted peppers with capers were placed on the table. Wine bottles were set out and everyone claimed a seat. The meal was uproarious with many conversations going on at the same time and wine bottles being emptied and replaced. 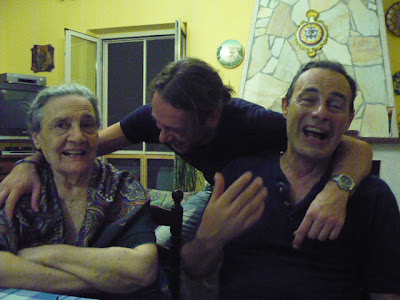 Much laughter and teasing and I found it all achingly sweet to see this large, loving family together. I leaned over and whispered to Scott, “Isn’t this like dinner when all the kids are home?” “No,” he laughed, “the kids argue more!” The table was cleared and bowls of large grapes, plums and melon slices were set out. The Sardinian cookie tin from lunch was once again opened. 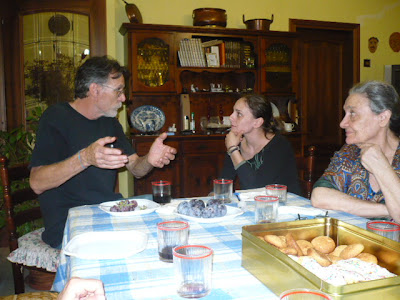 Two bottles were brought to the table-one was labeled Passtino and the other Prungna. “Try?” Pietro asked, and of course I nodded yes. The amber colored passtino was a perfect after dinner drink; sweet, rich and syrupy. The flavor was familiar, reminding me of the Torcolato we bring home from Italy each year. I was told it was made from the grapes that are “passed over”, therefore a bit dried when finally picked and processed into wine. This accounts for a sweeter and I think more complex flavor. Really delicious! Next the Prungna, a prune alcohol that tasted quite a bit stronger and not near as sweet. They laughed when my eyes opened wide and I made motions as if breathing fire! I remember other bottles, a clear liquid that made my eyes water and then some limoncello, but by this time, I had lost count of what or how much we were drinking. And Scott was way beyond me. 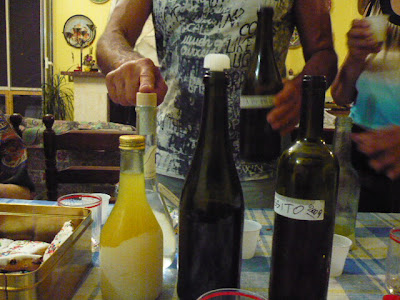 When my head hit my pillow that night, the room spun a bit before I fell into a deep sleep.
The next morning was rushed, with showers and getting our bags together to make an 8:00 train to Rome. I could tell Scott was hurting-he hunched over his espresso like his whole body ached although I suspected it was mostly his head. It was a bittersweet good-bye. I was so glad we got to meet this extraordinary family, yet I wished we could have stayed longer. Stella handed me a bag of plums off her tree to eat on the train and as I hugged her good-bye, she looked up at me and said, “Me lika you.” With tears in my eyes I told her, “Me lika you, too!”
Posted by diane at 10:54 AM