15 Sept 2010 13:07
In the train station in Zurich heading to Milan. We are settled in our seats and the train leaves in 2 minutes. For first class, the seats seem a little tight. Our seat mates across from us are two young men, they speak German and English. Our knees are almost touching. I had hoped for more space. I am going to try to catch up with our trip here as we have 3 hours before we arrive in Milan.

Our visit with Marnix and Renee was enlightening. We got such an education about Holland in general and Rotterdam in particular. While with Cor we were in a village and although it was busy, there was no comparison to the bustle of the big city. Rotterdam was exceptionally clean. After visiting the old part of the city and the museum downtown, Renee drove to the “bad” part of town. Not exactly what we would call the ghetto, but, according to her, pretty close. Lots of shops for African and Moroccan and Turkish foodstuffs, women with headscarves pushing baby strollers, men hanging out on street corners. Although the buildings were plain-no fancy ornamentation as in other parts of Rotterdam-and the curtains fluttering in the breeze from the open windows weren’t lace trimmed, the area was immaculate. I wouldn’t call it charming, but I could sense a pride of place, a community.

Renee and I and Marnix and Scott all met back at their house and prepared to go out to dinner. The restaurant was a sweet place with wooden floors and sturdy tables. Renee and Marnix were regulars. The menus were huge chalk inscribed slate boards. Renee patiently read off all the offerings. The Dutch language is difficult, although I can struggle through the menus-I don’t know why. I found I couldn’t understand a word of the spoken language, but reading it seemed easier…much of it how one would spell English words if done phonetically. All the Dutch meals we ate out-one with Cor and Angeline and now with Marnix and Renee-included French fries and a small bowl of mayonnaise. It seemed as ubiquitous as having salt and pepper shakers on the table. They brought a small ramekin of ketchup for us even though we didn’t ask. Yes, as Americans, our reputation precedes us-not always a positive thing. We had a nice dinner with easy conversation and then back to the house for a good nights sleep.

We were awakened the next morning by rain on the tile roof. It reminded me of rain on the tin roof at home. After showers and breakfast, our friend Will de Haan came by to pick us up. We met Will and his wife Astrid in April of this year when they visited Texas on vacation. The flew into Houston and traveled to Big Bend for a camping trip. They stopped in Fredericksburg on their way back to Houston. A mutual Dutch friend, Gido, had told Will to contact us while in the area. They met us in Fredericksburg and we had dinner together at the Brewery on Main Street. The next morning they joined us for breakfast at the ranch. Will and Astrid are an attractive couple, both tall and athletic. Astrid runs semi-competitively but more, I think, for the pure joy of it-she even ran the New York Marathon! They have backpacked all over the world and their home is decorated simply but beautifully with inspiring photographs and art. Their cat Patso: 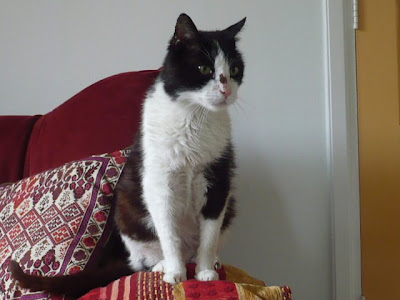 After a quick lunch of a home made, still warm loaf of raisin bread and various cheeses, meats and spreads (even some peanut butter!), we headed out for a trip to see a castle. The Muiderslot was originally built in the 13th century by Floris V. It was almost completely destroyed and rebuilt in the 14th century. A large moat surrounds the castle and the grounds are beautifully landscaped. The property the castle sits on is more or less an island with a narrow strip of land which allows access to the castle. Large and small boats fill the harbour. 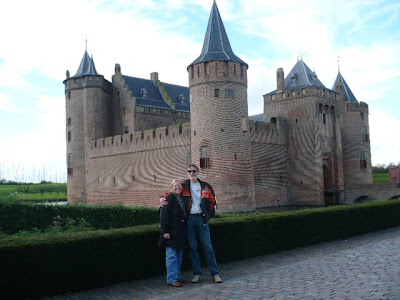 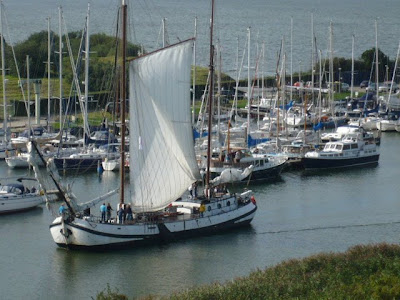 We walked through the castle leisurely, there were many interactive exhibits (some were even games!) to make it interesting for the kids. You could try on chain mail or heft a sword, dress up as a lord or lady in waiting or try your hand at jousting.  Lily always tells us how dorky we are! This is proof! 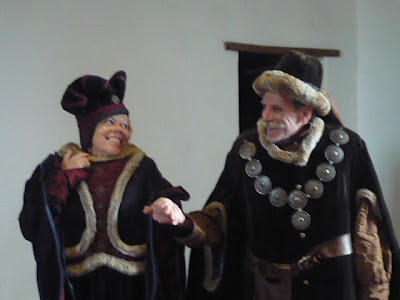 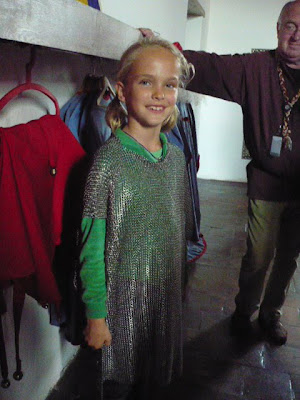 It was an interesting and thought provoking look at life in an earlier age. Although the castle had been greatly rebuilt/renovated in the mid 1800’s, particular walls were original to the 14th century. You could run your hand over them and feel the history. It made me shiver.

Back at Will and Astrid’s in Zeist, we prepared to go out for dinner. We went to one of their favorite restaurants which served Indonesian food. It was spectacular with perhaps a dozen different dishes, each one more tasty than the one before. Served family style, we all picked small bits out of the bowls and sampled everything…our favorites we went back to time and time again, although I have to say it was hard to pick a favorite as everything was so good! 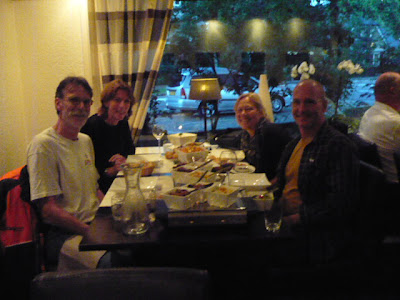 After dinner, they dropped us off at the hostel where we had reservations for the night. What a place! The grounds had a large stream running through them and swans slowly glided on the still water. It was pretty quiet (Scott and I have stayed in hostels in Italy before and they could get pretty raucous!) and our room was in an old mansion. We settled in our room-a private room with 2 sets of bunkbeds…we both chose bottom bunks-and were soon asleep. We had a hike in the morning to get to the bus that would take us to the train station and onward to Germany to see Tom and Cynthia.
Posted by diane at 5:05 PM