It is hot and sticky here in Central Texas.  Mid 90's with about 90% humidity makes for early morning activity and mid day lethargy.  We survive without air conditioning and therefore, around 2 in the afternoon (after lunch) we retire to the cooler bedroom (what a difference rock floors make!) and turn on the fan to nap or read or write.  Our dear grand daughter, Natalie has been with us since yesterday, so today the TV is on and she is watching a cartoon while Scott naps beside her.  This hot spell is supposed to break tomorrow with temps the next week in the upper 80's.  Nice!
After working away from home the majority of the last 6 weeks, it is nice to be back and catch up a bit.  The garden is so overgrown that parts of it are unaccessible unless I want to be chigger bait, but I am still picking tomatoes, green beans, spaghetti squash and a pepper here and there.  The arugula is up- having reseeded in the late spring -and I should be able to start picking it in a week or so...especially if we get some rain.  Cucumbers are just now coming on and the cantaloupe aren't far behind as well as some Italian squash.  Thank goodness for the Farmer's Market every week as it has kept me in cukes until mine come in!  We ate the first peaches from our trees this week and they are so very good.  I pick whatever is ripe every day and we eat them immediately, sometimes 2 or 3 a piece. I am saving all the pits from the peaches we eat as the tree was a volunteer, so I don't know the variety.  All I know is they are some of the best peaches I've ever eaten and we want the orchard filled with these trees. 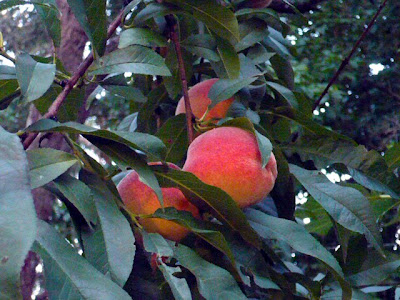 We butchered our chickens this week.  Scott was worried they'd be the size of turkeys if we didn't get on it.  It took us 3 hours to butcher 10 chickens and by the last 2 I was ready for it to be over.  It was much more fun last year (although fun is a relative term here) with Bernadette's help (see http://a-half-fast-life.blogspot.com/2009/06/butchering.html for the complete post on last years massacre butchering), but maybe it was also the novelty of it being our first time.  Anyway, I am glad it is over and the freezer is stocked with chicken for the next year. We are planning to raise a hog this fall after we return from vacation the end of September.  We've never raised a hog before, but it has to be more fun (there's that word again...) than the chickens and we can bring it into town to be butchered.
After Market yesterday, I picked up Natalie and we drove out to the ranch where I work frequently. They have some new animals so we drove the entire ranch, taking time to wade in the creeks and take pictures of animals. The camel came right over and let us pet it. 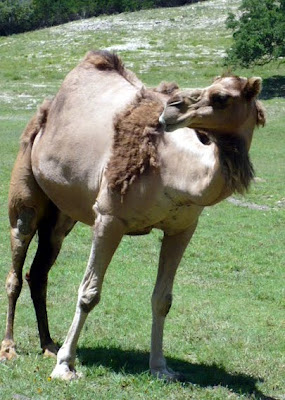 The zebras are Nat's favorites and they let us get pretty close. 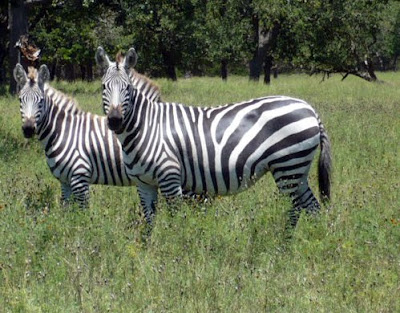 It took us over an hour and a half to drive the entire ranch and by the time we got to the main road heading home Nat was snoring in the back seat.  Seeing things through her eyes is such a joy!  Everything is a marvel to her and she says the funniest things. She told me yesterday that "This was the absolutely most funnest trip to the ranch ever!"
Eating this time of year is a bit of a challenge.  Not because of a lack of variety that's for sure, but because of the heat I don't feel like cooking or eating hot meals.  We generally have sandwiches or salads for lunch and smoothies for dinner.  I pressure cooked some garbanzo beans this week and made a big batch of hummous.  It doesn't last long around here and is SO easy to make.  You can make it with canned garbanzo beans, just don't add any salt until you've tasted it as canned beans usually have plenty.
I don't really have an established recipe, I just eyeball things in the food processor.  Hommous consists of chickpeas (garbanzo beans), tahini (sesame seed butter), garlic, lemon juice, olive oil and salt.  Sometimes I add cilantro or chipotle, but plain is really good.  So I would guess my proportions for this last batch were as follows:
4-5 cups cooked chickpeas
2 Tablespoons tahini
8-10 medium peeled garlic cloves
1/4-1/3 cup fresh squeezed lemon juice
2 Tablespoons olive oil
1 teaspoon kosher salt
Just dump everything into the food processor and turn it on.  Let it run until it gets smooth. If it seems too thick I thin it with the liquid from cooking the chickpeas (or the liquid from the can) instead of adding more olive oil.  It adds nutrients and no additional fat.  I taste it and add whatever I feel it needs-usually more lemon juice.  I tend to use LOTS of raw garlic, as that flavor seems to fade the most with refrigeration.  We eat it on crackers, but more often with veggies-celery, sliced peppers, cucumbers.  Since I am not a mayonnaise lover, I use it as a sandwiche spread.  This was my lunch this afternoon: 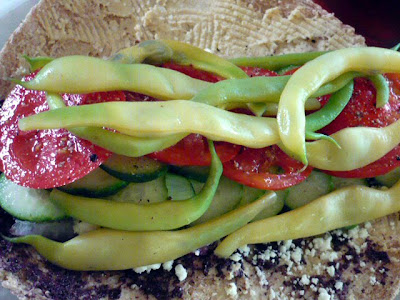 I get these terrific wheat pita breads from Ali Baba on Wurzbach (1 block west of I10) in San Antonio.  They make them fresh daily and they are really inexpensive, so I buy 4 or 5 packages and freeze them.
You can cut them in half and stuff them or cut around the edges and use them like a wrap.  I like them better than wraps as they are not as thick. The sandwich above is smeared with hommous, then a bit of tapenade (olive paste), then some feta. I top it with whatever veggies I have at the time, but most always tomatoes, cukes and red onion.  I had gone out to the garden right before lunch and picked a few handfuls of green beans and cooked them briefly.  They were a great addition to the sandwich! I also picked some banana peppers, but forgot to include them-good thing as I could hardly get the wrap around this sandwich as it was!
It was a perfect lunch for a hot summer afternoon!
Posted by diane at 3:25 PM