Our New Family in Latina Part One

We left Milan at 8:15 a.m. on a fast train for Rome.  The plan had been to tour Rome for a few hours before catching the train for Latina and connecting with Claudio, our friend from Houston and his Italian family. But once in Rome, we were laden with luggage (and we have relatively little) and felt assaulted by a portly old woman outside the train station who kept lifting her skirt up to reveal her naked genitals. She would stand there with her skirt around her waist and yell and swish her buttocks back and forth. Not a pretty picture. We were sitting outside the station trying to eat lunch and finally put it all away and headed inside to catch a train an hour earlier than our original plan.  We found a train leaving in about 15 minutes and headed to the platform.  It was a regional train, meaning it was old and cramped and very full.  We kept passing car after car looking in the window for a car that had some empty seats.  We finally found one and stepped up into the train when we heard a very loud voice yell, "Hey!" We spun around and, lo and behold! there was Claudio! He and his wife Ramona had been on a Mediterranean  cruise and were going to spend a week in Latina where Claudio's family lives. Like us, they also took a train other than the one they had planned on taking! We were supposed to meet up in Latina, but by some stroke of luck we found each other in the Rome Terminal! We followed Claudio down to their train car and settled in with him and Ramona, thrilled that we were together. Once in Latina we were met by Claudio's neice Francesca and nephew Davida in 2 separate cars to hold 4 passengers and LOTS of luggage. After 5 minutes at Claudio's family's home, I think I now know the real way to see Italy-spend time in the home of an Italian family. When we stayed with the Piero and Luisa Laverda two years ago for a few days, we were guests. Here, in Claudio’s family home, surrounded by siblings, nieces, nephews and his wonderful mother we are family and living and breathing the Italian lifestyle. Claudio is home. He talks 90 miles a minute and I catch every 5th word, so I smile wide and nod my head a lot. His mother Stella is lovely, 81 years old, sharp and active. She has smiling eyes and a gentle smile. When I showed her the picture I took of her and Claudio, she dropped her chin to her chest and muttered, “Old, old…” 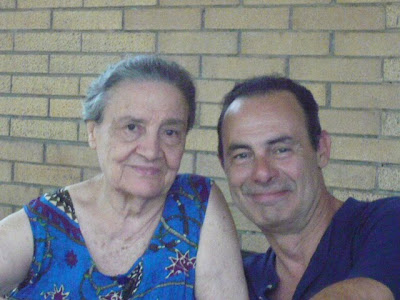 I want to gather her up in my arms and hug her. I told her I was going to move in and that I would cook for her. I received a big smile in response. The homestead is really a compound. Claudio’s sister, Mariuccia and her husband, Pietro and two sons live next door. There is a large empty lot on the other side of Stella's house and, as we stood in the back yard I watched some gypsies wring the necks of about 8 chickens.  Stella said something had been killing them so they must have decided to finish them off themselves. 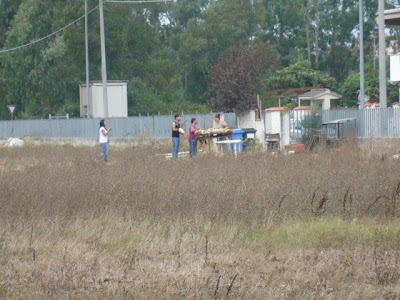 Gypsies with their now dead chickens piled on the table! 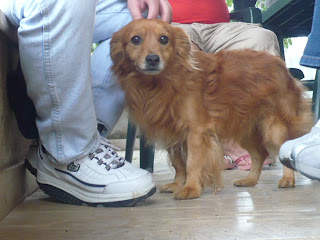 Stella's sweet dog, Yogi. (I am probably spelling this wrong)
We were soon herded next door for lunch. Walking through the yard, there were plum and pomegranate trees, an olive tree full of olives, fruiting cactus, an apricot tree and a lemon tree with lemons as big as my fist. 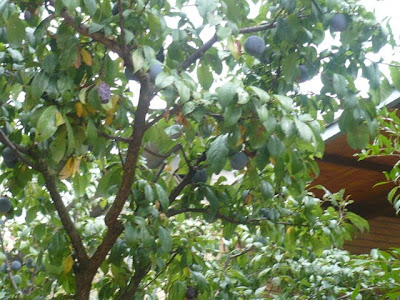 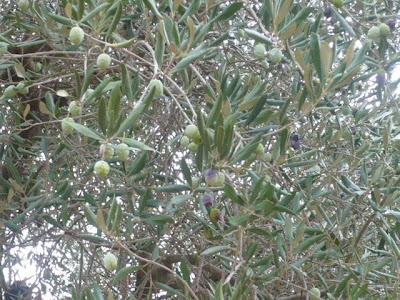 We were welcomed into the dining room and soon a robust red wine was served. Massive plates of spaghetti were set before us and crusty bread was put out. I watched as Mariuccia diced a small red pepper onto Claudio’s pile of spaghetti. She looked at me and I held my plate out. “Picante” she said tentatively and I smiled wide and nodded my head, “Yes, I’m from Texas…picante is good…” She diced the pepper over my pasta. I scarfed down my entire plate…it was so phenomenally good and reinforced my thinking about food in Italy-Simple is Best. Claudio’s wife Ramona was sitting next to me and related a story about their last visit to Latina. Claudio’s father asked Ramona and her daughter, Daniela if they’d like to accompany him to town because he was out of cheese. They ended up at a local goat farm where they picked up their cheese and Daniela was allowed to pet the goats. “That is the reason,” Ramona told me, “all the food here tastes so good! Everything is unbelievably fresh!” Pietro had risen from the table and was puttering in the kitchen. He returned carrying a tray of sausage, wafer thin slices of prosciutto and chunks of braeseola. On a cutting board was a wedge of pale yellow cheese. The tray and board were passed around and we all filled our plates again. More bread was torn from the loaves and we commenced to eat. As we emptied wine bottles, more were brought to the table. Our glasses were never empty. There was lots of conversation and a particular point would be made by waving a finger, a chunk of bread or a fork in the air. The laughter was infectious and although most of the time I couldn’t understand what was being said, I laughed along. Pietro once again left the table and returned with a plate filled with huge slices of yellow melon. It had a sweet, creamy flavor and after much discussion it was decided it would have been better in a day or two. I thought it was delicious…I couldn’t imagine what transformation it would go through had we waited to cut it. Pietro wouldn’t sit still and jumped from his chair again to grab some small cut glass cups and a large tin which he set in the middle of the table. He then went to the freezer and took out a bottle frosted from the cold. The liquid inside was syrupy and brilliant yellow…ahhh, limoncello! I have been so enthralled with this delicious liqueur from past visits to Italy, I actually made a batch last year as gifts. Pietro filled the tiny glasses and took the lid off the tin. “From Sardinia.” He told us. Two kinds of cookies filled the tin. He pointed to the puffy golden rounds -“Amaretti” and then to the heavily iced irregularly shaped wafers, “Especial from Sardinia!” The amaretti were sweet and almond flavored. They were delicious between sips of the icy Limoncello. The other cookies were biscuit like. I didn’t know which I liked better. Espresso finished the meal. I was stuffed. Ramona cocked her head in my direction and whispered, “It’s hard to believe we’ll eat again in six hours!” When we returned to Stella’s home, Claudio’s brother Nuncio was there. He and Claudio demonstrated how to pick the cactus fruit and then Nuncio proceeded to peel some for us to taste. 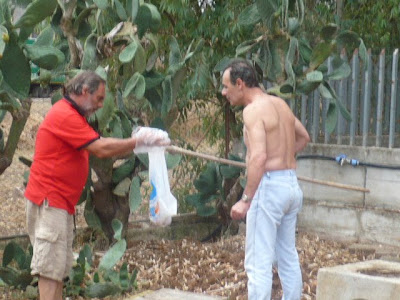 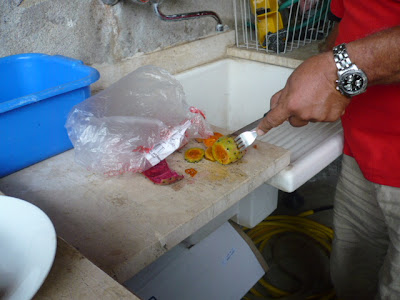 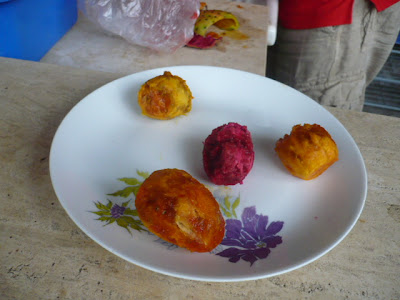 It was decided we would pay a visit to the beach for the afternoon. Latina sits south of Rome and consists of three small towns. Latina Scalo is the farthest East and is where the train station is located. Latina (Latina proper) is the main town and where Claudio’s family live. Latina Lido is the beach town. As we drove through the streets, it began to rain. Nuncio drove with one hand on the wheel and the other gesturing to Claudio in the back seat. It made for an exciting ride. We drove along the beach road with the rolling waves of the Mediterranean on one side and small shops and restaurants on the other. The rainstorm had already moved through here and it was mostly deserted. We stopped at a small café that had a sign outside reading Gelato Artigianale. Really? After the meal we just had? Scott believes the major food groups in Italy are gelato, espresso, pasta and wine and he makes sure he indulges himself as often as is humanly possible. We ordered our scoops and Nuncio and Scott also ordered espresso. I had nocciola (hazelnut) gelato, my fall back flavor when yogurt or ginger or some other fairly exotic taste isn’t on the menu. We wandered to a table close to the street and ate and talked. I was itching to get to the water. Soon we crossed the street and walked down the sidewalk until we found a place to enter the beach. The sand was damp from the rain and I took off my shoes and walked to the waters edge. I stepped into the water and walked down the beach. Everyone else held back on the sand. The waves soaked the bottom of my pants and sand clung to the hem. I was in heaven. The waves rolled onto the beach. Claudio called after me, “You are such a hippie!” I wasn’t sure what that meant, but it was okay with me. 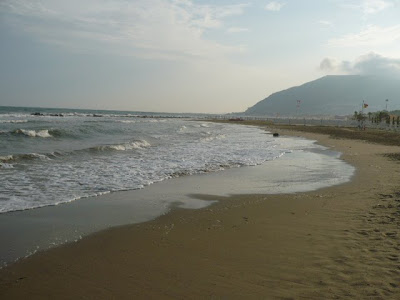 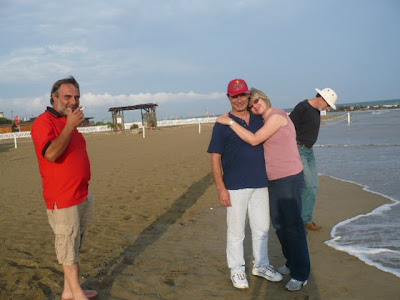 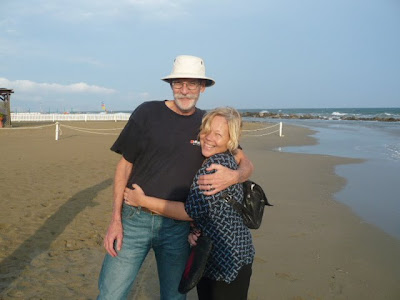