We leave in the morning for 3 weeks in Europe. We fly into Geneva, Switzerland on Wednesday and will cross the border into France (a whole 12 miles) and stay in Annemasse for 3 days just to decompress and relax a bit alone before the socializing times begin! On Saturday we travel by train through Switzerland to Simmerburg, Germany which is on the border of Germany, Switzerland and Austria. We'll be staying with our friends Tom and Cynthia for 4 days. We met Tom last year in Vicenza at Piero Laverda's home and he and his wife Cynthia visited us in Texas last Autumn. Tom, Scott and a few other buddies are riding bikes over the Alps into Austria and then onto Vicenza, Italy where we will spend the next couple weeks. I think I am taking the train from Simmerburg to Vicenza, although there may be the option of driving down with someone else in the group (in a VAN, not on a BIKE!). I am leaving that option open. I believe we are all spending the night in Innsbruk, Austria on the way to Vicenza. It's funny because, looking on a map it seems like all these places are SO FAR APART. But in reality they are very close. I mean the entire country of Italy is about as big as Florida and Georgia combined (and kinda' the same shape, yes?). Trains go everywhere and are so inexpensive and they are such a joy. I use the time to catch up on my journaling and watching the countryside go by.

I just returned from 2 1/2 days in Connecticut as a surprise for my mother for her 75th birthday. My sister Doreen, who lives in Florida flew up also and we had a great time. Mom was surprised to say the least. We all decided that we want to age like mom is aging...she can outrun us all! The weather was incredible -unseasonably cool even for New England- and I was chilly the whole time! What a refreshing break from the trecherous summer we've had in Texas! We visited the houses we lived in throughout my childhood and I took pictures. Driving north to south -from the Long Island Sound (we lived in Old Saybrook for a year) to mere miles from the Massachusettes line in about an hour and a half! So different from Texas!
I was showing Scott the pics of the houses we lived over the years. This is where we lived when I was born: 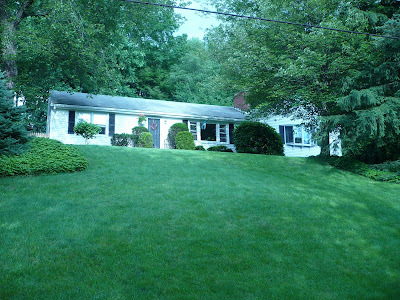 Look at that lawn!!! Behind this house and up the hill is where my dad had his worm box...one of the 7 Wonders of my Childhood. My first memories of life are in this house, like when I played with a razor blade I found beside the kitchen sink...the sink was full of water and as I played with the razor blade under the water beautiful ribbons of blood swirled through the water. Unbelievably, it didn't hurt at all and I was enthralled with the colored trails I could weave under the water. And then my mother walked in the kitchen and saw me perched on a chair by the sink. I think she screamed when she saw the water, but what I remember most was that the cuts on my hands REALLY hurt when she pulled them out of the water! It wasn't bad really, nothing that a few band-aids couldn't fix. Weird, huh? Then we moved to this house when I was about 3: 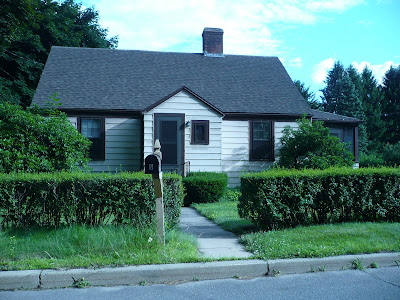 I loved this house! My grandparents lived in a house directly behind us on the same lot and behind them was our orchard. Rich with apple, pear and crabapple trees. My great Aunt Lucy lived across the street and I spent lots of time with her in the old apartment house she ran. She seldom had boarders, so we roamed the big old house constantly. We then moved to West Suffield on the Massachusettes border, but I don't have the pic of that house. But quite a few years later (after a move to Florida and back) we moved to Old Saybrook, a beautiful village on the Long Island Sound. We had a great house there. This is the pic I showed Scott: 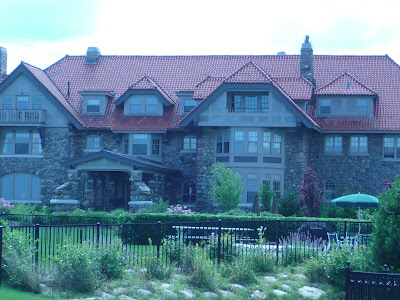 He stood there with his mouth open. I let him drink it in before I told him..."Nah, we didn't live here, this was the Inn at Cornfield Point. But we did love to sneak in and wander the halls!" This was actually our home for our first 2 months in Old Saybrook: 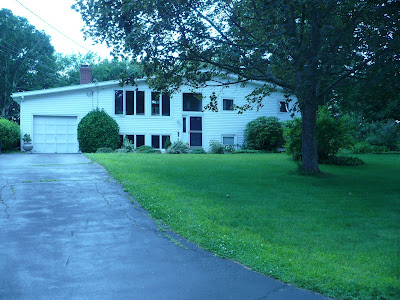 And then misfortune befell our lives and our circumstances changed drastically. I didn't get a pic of the house we moved into after this house because it had been bulldozed!!! And believe me, it deserved to be! It was just a few blocks from the Inn at Cornfield Point and a block and a half from the beach which was nice, but it was a tiny summer cabin and we lived there in the winter. Very close quarters for mom and 4 kids! You know they say, "You can never go home again" and I do believe that's true. I like having these photos of the places that formed me, but I am not so crazy about the memories that come with them. My other sisters felt the same way. There were some incredibly difficult situations that we, as a family, found ourselves in. Much of it was unpleasant, rough and sometimes downright scary, but we made it through. We all turned out reasonably sane (I know this is debatable, but really, I don't want to hear it!) and are stronger for it.