Dinner for a Cold, Rainy Night

After temps in the 80’s last week, I began to think that Spring had surely arrived. Hell, I was worried that SUMMER had arrived! We are DRY here in Central Texas and everyone I know is struggling to keep up with their gardens as far as watering goes. My rain catchment barrels were getting low and I was worrying about the well. I am a weather geek and check out the 10-day forecast every day (okay, sometimes a few times a day), so when I saw that a bit of precipitation was forecast for this week, I got pretty excited (but then I’m easily excited…see previous post on my WORMS!). Everyone to whom I mentioned the rain possibility gave me a disdainful look and told me various versions of, “I’ll believe it when I see it.” Well, rain it did! Over 4" here at the ranch and along with it temps in the 40’s, day and night! Brrrr! We hauled the down comforter back to the bed and relit the heaters. We started wearing stocking caps indoors. This is a leaky old farmhouse we live in and we don’t have central heat (or air, for that matter), so we dress warm and I make a lot of soup in the winter. I had planned last week to make fish tacos this week. Fish tacos mean summer to me (so do spring rolls!) and I thought I’d finally accept that warm weather was here for good by having a fish taco feast for dinner one night. Our youngest, Lily, moved home on March 1st and she has yet to experience the thrill of fish tacos. So, I thought I’d treat her. Well, the fish is in the freezer, the avocado sauce recipe is sitting out on the counter next to the avocadoes and the cabbage is still uncut in the vegetable bin of the fridge. We are back to being knee deep in SOUP WEATHER!
Which brings me to dinner tonight. I was visiting with my friend Fran and she said she made lentil soup last night. I had been trying to decide what kind of soup to make for dinner and had narrowed it down to cream of asparagus even though I only had skim milk in the fridge (it’s the best choice for cappuccinos…lotsa’ foam!). And truth be told, I wasn’t terribly excited about it. I had a couple cans of coconut milk in the pantry and figured I could use that as cream. I had 3# of fresh asparagus in the fridge and although I’d rather grill it (and indeed, that was the plan for it when I bought it) I wasn’t going to be grilling ANYTHING anytime soon, so I figured I’d sacrifice it to a pot of soup. That is, until Fran mentioned lentils. I started thinking lentils…and then coconut milk…and then MULLIGATAWNY! An amazing Indian soup made with lentils, chicken, fragrant warm spices, coconut milk and cilantro; it is one of my very favorites, and Lily’s also! And the garden is FULL of cilantro!
I have very fond memories of eating terrific take-out Mulligatawny Soup on Mount Lemmon overlooking the lights of Tuscon, AZ while visiting Lily there a few years ago. 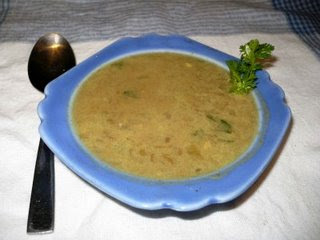 1 T. oil (I used olive)
1 medium onion, chopped in medium dice
3 large cloves garlic, chopped fine
1 T. garam masala (I made a mixture of ground cardamom, cinnamon, cumin, cloves, coriander, black pepper, nutmeg, tumeric and cayenne)
1 large bay leaf
1 ½ cups brown lentils (you can also use red lentils, in fact, I think they’re more traditional)
5-6 cups low sodium chicken broth
1 ½ c. cooked, diced chicken
1 can (13.5 oz.) unsweetened coconut milk
¼-1/3 c. fresh cilantro, coarsely chopped
In a soup pot over medium heat, saute the onion in the oil until a bit soft, then add garlic. After a few minutes, add all the spices and stir to coat the onions and garlic. Doesn’t that smell good? Add bay leaf and lentils and stir until coated. Add the chicken broth and bring to a boil. Reduce heat to medium and simmer, stirring occasionally, until the lentils are really tender and even starting to break down a bit, about 30-35 minutes. Stir in cooked chicken, coconut milk and half the cilantro and stir for a couple minutes. At first, the coconut milk looks like it is a bit curdled, but keep stirring and it all smooths out real nice. Serve with more cilantro on top. Sometimes Mulligatawny is served over basmati rice, but I don’t like anything to tame the flavor. It is fabulous all by itself!
Along with the soup, I made tapioca with coconut milk for dessert. A nice (albeit rich) finish to a spicy soup. 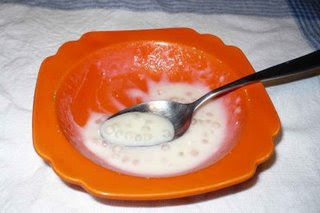 In saucepan, mix all the ingredients except the egg. Heat over medium heat, stirring frequently for about 20 minutes, until the tapioca pearls look translucent and begin to soften. In a small bowl, beat the egg. While whisking the egg, mix in about ¼ cup of the hot milk and continue whisking until the mixture is smooth. Whisking the tapioca mixture quite vigorously, slowly pour the egg/milk mixture into the tapioca mixture.
Continue cooking the tapioca for about 5-10 minutes more, stirring most all the time. It will thicken slightly. Remove from heat and let cool for 5-10 minutes.
This is not a thick tapioca, not pudding-like at all, but quite loose, especially if eaten warm. The texture is smooth and rich. If you prefer a more firmly set tapioca, let cool completely.
In the summer, this tapioca is great refrigerated overnight and served cold!
Remember to shake the coconut milk well. Even if you do this, sometimes thick white coconut milk/fat will congeal on the lid. For a lighter version, just skim this off before using the milk. My friend Leslie used to refrain from shaking the can completely and simply opened it and discarded all the thick coconut stuff at the top or save it for another use. She said it was "light" coconut milk! The coconut taste is still there, but some of the richness is gone. You can refrigerate the can before opening it as it makes the "fat" easier to spoon off. A great tip for summer use of coconut milk when you want dishes to taste lighter!
Posted by diane at 8:16 PM