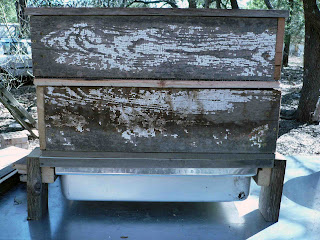 My worm project is underway!! I have spent the last few weeks researching and building my worm box and on Friday evening I met with a "worm master" in Austin, Gordon Wybo, and picked up 2 lbs. of red worms. Wow, my own personal stash of Eisenia Foetida! I spent almost an hour with him, his wife and their two teenagers and I gotta' tell you, this guy knows his worms!! These are the kind of people that, in their own quiet way, are saving the planet. He was giving a free seminar on vermiculture the next day at his house, so the place was literally crawling with worms. He raises his in plastic tubs and I wish I had taken pictures because he is so organized and he made it look incredibly easy. It was after 11 when I got home that night, so my worms stayed in their little cardboard boxes (which are biodegradable-Gordon thinks like that!) and I couldn't wait to haul my worm box in the house and set it up. I built it with an old vegetable bin from a 1950's refrigerator as a liquid catchment system. Gordon said there should not be much liquid, but he taps a spigot into the side of his plastic tubs just in case. So I guess my huge bin in overkill. The base of the box is filled with coconut coir (a neutral ph bedding AND a renewable resource), shredded paper and a bit of garden soil. Then you add your worms.
They are smaller than the nightcrawlers I remember my dad having in his worm box when I was a kid. Boy, the hours I would spend watching those worms! I guess it is no surprise I have this worm bin going now. I've been interested 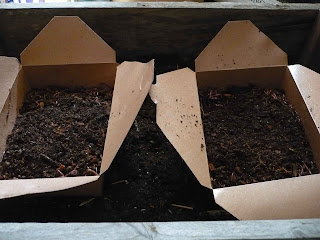 in worms since I was 2 years old! Here are the worms, still in their nifty biodegradable boxes,
getting ready to be introduced to their new home.
When I dumped them out into the bedding in the worm box, there were LOTS more than it looks like in these boxes. They tend to bury themselves to avoid light, so most of them were in the bottom of the boxes. Two pounds of worms is ALOT! They were very active when I turned the boxes over and immediately started burrowing into the bedding. Their nickname of "red wigglers" is well deserved. I took apart the boxes and laid them on top of the worms and bedding as a cover and to make sure all the beneficial bacteria that might still be adhering to the boxes would get incorporated into the environment. I waited half a day before feeding them and then chopped up some turnip tops from the garden and a banana peel and mixed this with some coffee grounds and tea bags (they'll breakdown the tea bag, the string and the tag even! But not the staple...). I lifted the cardboard boxes, sprinkled the food over the soil and worms, replaced the boxes and then my wooden lid. This morning when I checked them the food was moved around, some half buried and they seemed happy and active. To contact Gordon for info about worms or to buy some, his website is: http://wyboswigglers.com His website has LOTS of information about raising worms as well as supplies you can buy and a complete listing of his FREE workshops. 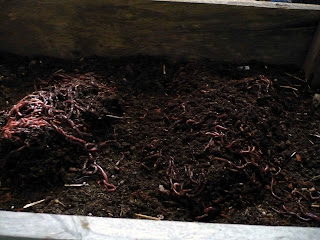 This is about 2000 worms!!!
They will reproduce!!!
They will eat my kitchen refuse and turn it into black gold which will then super fertilize my garden!!
I can soak the worm castings in water and make a super solution for my garden that will increase my plants' growth and make them more disease resistant!!
Can you tell I am super excited??!!