The Stars are in my Favor...

I had great plans for today, really I did. The problem was that I hadn't completely formulated them when I went to bed last night, so I woke up a tad bit aimless. Days off do that to me. Not that it was a real day off, I had LOTS to do, I just didn't have to work away from home and sometimes that spells trouble. I can waste so much time under the pretense of "research". I began the day by throwing a batch of bread ingredients into the mixer. It was a batch of my very favorite bread...I call it Kitchen Sink because it has just about everything in it. Six grains, six seeds, nuts, two kinds of dried fruit...it is the VERY BEST loaf toasted and makes killer sandwiches. After that dough was kneaded and put aside to rise, I started on a batch of rye. I noticed towards the end of the kneading, the mixer skipped a beat and then when the dough hook came around to the same spot it had skipped, it made a slight grinding sound. It made me raise my eyebrows and purse my lips and I have to admit my stomach did a bit of a clench. That dough got put in a greased bowl to rise and about 30 minutes later, I started another batch of Kitchen Sink. The mixer continued to grind at that same spot, a bit louder and a bit more frequent until it would actually get stuck in that spot and I would have to manually move it so it would continue on its rotation. After doing this for a minute or two, I gave up and moved the dough to my board and hand kneaded a few minutes more, then put it in a greased bowl to rise. Although I have felt guilty before that I don't do my initial kneading by hand, this unintended experiment has convinced me I was doing right all along. These heavy, whole grain doughs really need the muscle that my heavy duty mixer can give it.
Look at the difference between the two loaves! 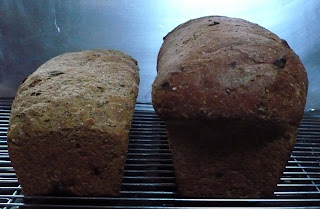 The one on the left is hand kneaded (albeit not for very long), the one on the right was kneaded by my mixer. I love my mixer! It is a KitchenAid ProLine 600 and it is big and tough and oh so beautiful. I put these mixers through their paces, sometimes making 6-7 batches of bread dough in a day...that's over 45 cups of flour! This is the second KitchenAid Pro 600 I've had. So when it seemed to be mortally wounded, I called Kitchen Aid and explained the situation. They put me on hold for a few minutes and when they came back on the line the sweet woman said they would be sending me out a new one. Save the box, she said, and pack the old one up in the new box and send it back with the UPS tag that will come with the new mixer. Whoa!!! Amazing! I got off the phone and wandered around with my mouth open for a few minutes. Little did I know that at the very moment I was sobbing to the customer service representative (well, I wasn't really SOBBING...), Scott was out in the shop putting together my old Hobart A200, an ancient 20 quart commercial mixer that is a St. Bernard compared to the beagle Pro 600 that stands on my kitchen counter. He took it apart months ago, had it powder coated and has been working on it in fits and starts ever since. Now THAT machine can knead some bread!! So when I return from a week in Virginia with my impossibly happy grandson (who will turn 2 on May 1st), I will have a new KitchenAid on the counter and hopefully, it will be dwarfed by the A200 beside it, all back together and anxious to start growling. Seriously, which loaf of bread would YOU rather have? 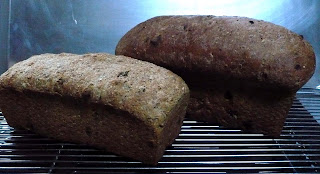 So, I was flush from my luck with KitchenAid and decided to call Black and Decker. I have a food processor of theirs (It's mine really, but they manufactured it) and the plastic lid and bowl have chipped in a few different places. I don't work this machine hard, really I don't, certainly not like my mixer, and I have to admit I was a bit disappointed that it hadn't held up better. I thought I would see if a replacement bowl was available and how much it would set me back.

I waited on hold with the same advertisements playing over and over and a robotic voice breaking in every 2 or 3 minutes telling me where I was in the queue. It was only a wait of 15 minutes or so until a real person came on the phone and I told my story (no sobbing this time) and then asked how much a replacement would be. She gave me a price and I asked if there was a discount because the food processor was practically new. She said in that case, give me your address and I'll ship out a new one free. WOW! After giving her my information, I hung up the phone and wondered if I should go buy a lottery ticket. Too far to drive...Instead, I decided to buy some new loaf pans. I have four now and bake in batches and thought four more would be a good purchase. I went on Amazon and found the pans I like-Kaiser Tinplate 10" and ordered four. I added onto the order a book I've wanted, "The Formation of Vegetable Mould Through the Action of Worms" by Charles Darwin. The definitive work on worms and mine are doing splendidly, thank you for asking. They especially like strawberry tops, eggshells and espresso grounds, the latter making them rip through those eggshells like greased lightning! When I totalled my order on Amazon and clicked free shipping (the order was over $25), up comes my final invoice and the bread pans were...are you ready for this?...4 for the price of 3!!! I have decided that today the stars are in my favor.

A GRASS FED CALF
This is a photo of a grass fed calf. Handsome guy, huh? 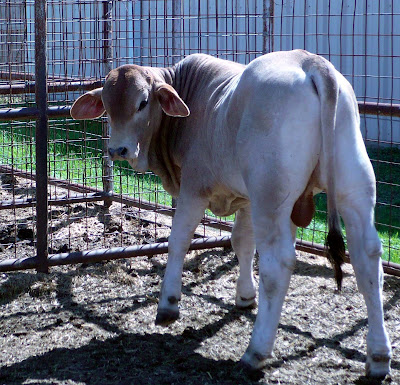 John Karger of Comfort, Texas raised this calf on his family land. He fed it very well and took good care of it and he sold it to me last week. I never really had it in my possession. I just met John at the butcher shop, took some pictures and told the calf thanks for becoming our food. Then I went inside the butcher shop and told them how many chops, steaks and pounds of stew meat I wanted and how to package it all. There are a number of families splitting the meat from this cow. It is all part of a grand experiment to try to eat more consciously. Along with the dozen Cornish Rock chickens I am raising for butchering. This calf is so lovely, look at those eyes. The chickens, on the other hand, are just this side of ghastly. I won't even post a picture of them here, at least not yet. They are UGLY! When they get more feathers they might look better, but for now I won't think twice about making them our dinner.