My last post finished in Ponte de Lima, a picturesque town on the Rio Lima. When I headed out the next morning, I found myself walking in the first clear day in almost a week. The daily rains had swelled the river tremendously though and, as I walked across the bridge and out of town, a waymark sent me down a back country road where my progress was stalled because a bourgeoning tributary had rendered the road impassable. 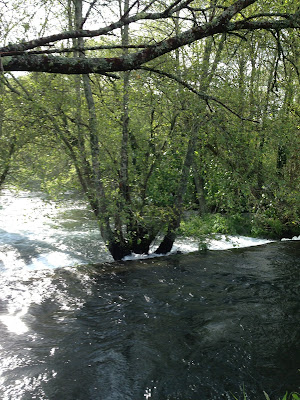 I backtracked a bit to the main road and walked through a small village until I found an arrow again. I met a young woman named Francesca (from northeastern Italy, but living in England) that morning. She had not let the water over the back road stop her and had maneuvered her way through a vineyard to go around it. We walked together on and off most of that 11 mile day and what a day it was! In addition to navigating trails with ankle deep mud and others that had become small streams, we climbed more than a thousand feet up the steep Alto de Portela Grande. The path abandoned us on the mountain and we were left to scramble up boulders and washed out cuts through the eucalyptus forests. 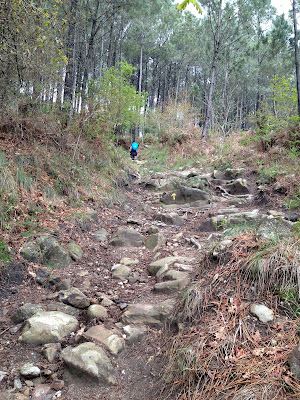 Francesca climbing ahead of me
It was an incredibly strenuous day and climbing down the mountain, though not nearly as steep, proved no easier because the massive amount of rain created slippery mud everywhere. 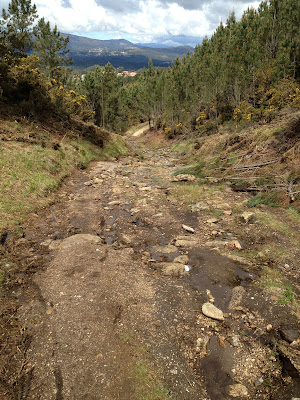 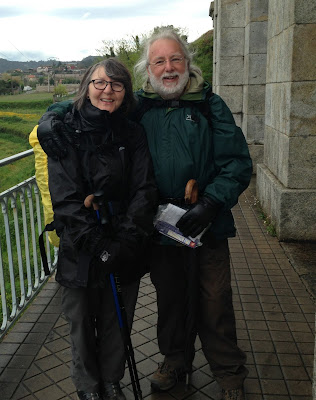 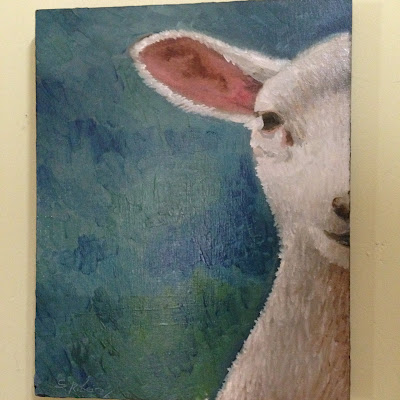 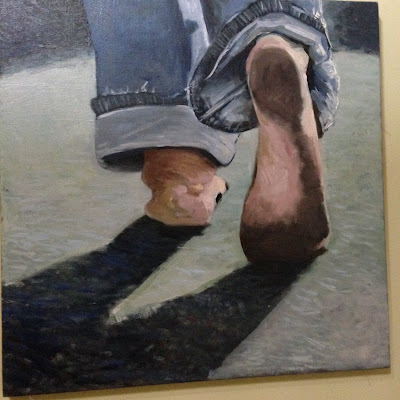 Dinner was wonderful that night. Before we ate, a prayer was read and sent on to the pilgrims who had stayed the night before, their names read off the previous nights check in sheet. It was nice to think the next night whoever sat at that table would bestow a blessing on all of us.
The next day was a long walk of over 10 miles but the walking had become easier and I was feeling better every day. My shin splint had all but disappeared and the only thing that hurt was my feet, which didn't surprise me. I was less than 35 miles away from Santiago! I stopped for the night at a small hotel which my Camino book said had rooms for 25€. When the proprietor filled out the check in form, he handed it to me to sign and said, "Fifty euros." I showed him the guidebook where it said 25€ as I handed him a 50€ bill. He just shook his head, went to the register and brought me back 35€ in change! It was 15€, not 50€! It was a great private room with a huge terrace and and I sat outside all afternoon doing a bit of yoga and reading.
The next day was an 8 mile walk into Padron, which put me less than 16 miles from Santiago. I had reserved this hotel under Elin's recommendation and it was quiet and elegant and only 30€, which left me some money to eat tapas for dinner in the hotel restaurant, where I enjoyed pulpo (octopus) and seafood rice. I was excited as I left Padron the next morning. It was cold - upper 30's - but it would be an easy six mile walk. I checked into Glorioso hostel and it was, by far, the worst place I stayed the entire Camino. For 10€ I had a private room with the bathroom across the hall, but it lacked any sort of comfort or cheer. Since dinner was served so late, I decided to eat a huge lunch and go to bed early for the 10 mile walk to Santiago the next day. I went downstairs to the restaurant and looked at the menu. First an Ensalada Mixta, then a Tortilla. And how about an order of calamari? She looked at me like I'd lost my mind as I'd pretty much ordered three meals. The mixed salads had been great, I'd eaten them every chance I'd had. Piled with tuna, olives and lots of vegetables, it was the only veggies I'd seen on menus. The tortilla is a cross between a crustless potato quiche and a potato omelet and they're terrific. The calamari was tender and tasty. It was all cooked well and I ate every last bit. While I was eating, two women walked in and were speaking English to each other and Spanish to the proprietor. I asked them where they were from and I found out they were Androula from Canada, now living in Crete and Sharon from Canada. We talked for awhile and I joked that I was so glad it was my last day tomorrow because someone was sneaking rocks into my backpack every morning as it just got heavier and heavier! "Why not send it on to the next stop? Its only 5€!" What??? They set it all up and the next morning I put 5€ (about $5.75) in an envelope and attached it to my backpack with a tag stating the name of my hotel in Santiago. I have to admit it felt strange to be walking without my turtle shell, but my back really appreciated it. The almost ten mile walk into Santiago was filled with awe for me. I had done it! When I reached the outskirts of Santiago I came upon this way mark: 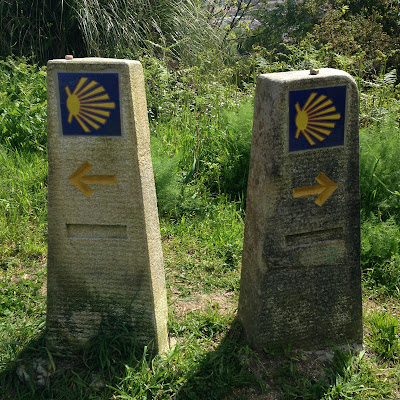 What wise guy thought THIS was a good idea?
I headed right through an older neighborhood instead of left into a part of town that had new high rise apartments and it was a good choice. When I got into Santiago proper, I got lost. This close and I lose my way! I had to pull up Google maps to head in the direction of the Cathedral and finally followed a bunch of people wearing backpacks until the square in front of the Cathedral opened up in front of me. And just like that, I was there. I sat on a stone bench and tried not to cry. I texted my sister Dawn in Connecticut and she in turn called my mom. I watched pilgrims arriving and tour groups being led around and just marveled at it all. I found my hotel and my backpack was waiting in my room. I took a long bath and texted friends and family. My grand daughter Natalie texted me, "Congrats Gramma! Now come home!" The next day I went to the square to watch for Liz and Derek. I went to the noon pilgrim mass and saw Herbert and Khiuk, a couple I met from Tucson. At the evening mass they swung the Botafumeiro, the massive incense burner. Pretty impressive. There's a point in the mass, which is all in Spanish, where you turn and shake hands with those around you. At the evening mass it was packed shoulder to shoulder (I never got there early enough to get a seat) and when I grasped the lady's hand in front of me she turned and it was Sharon from Canada. We hugged warmly. I went to the square for a few hours every day and watched reunions and celebrations of completion. My last day, I was sitting there lost in contemplation when someone called out, "Miss Texas!" It was one of the Australian ladies and we sat and reminisced for a bit. She told me she'd been to Finisterre and had seen Erica. Oh how I wish I could've said good bye to her! Just then, Erica walked around the corner and I could've cried! She filled me in on the rest of her walk and told me she was catching a plane to London that afternoon and then home to Virginia the next day. We went to lunch and reflected on what the Camino meant to us, how we felt it changed us and what was next. She was heading home to walk across the stage to receive her diploma and then move to D.C. for her new job. She was such an inspiration to me!
The next morning I took a bus to Finisterre and it was a perfect place to rest and think. Considered the end of the world during Roman times, Finis = End Terre = Earth, it is also considered the end of the Camino. 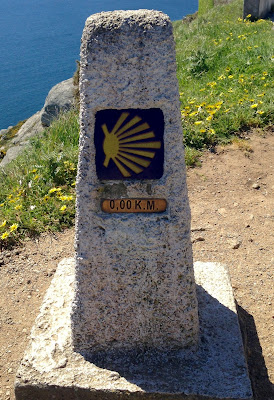 0.00 KM at the lighthouse
There were fabulous secluded beaches and bright, sunny days. 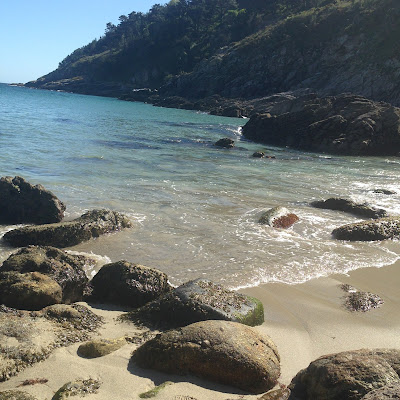 I ate seafood and walked the back streets of this beautiful seaside village full of pilgrims. I was on a beach having a private moment of contemplation standing in the knee deep surf. When I turned and walked a few steps back to the sand, I found this. 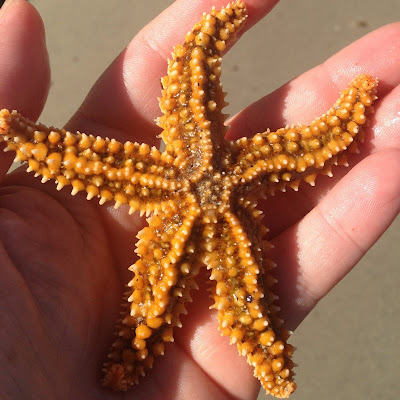 Would I do the Camino again? I'm already planning it. I'd like to do the Portuguese Coastal route or the Porto route again. I wrote in my journal: "How great/difficult/fun/painful/exciting/crazy/ joyous this has been!"
Physically, the Camino was the hardest thing I've ever done, but incredibly rewarding. I feel strong and proud of my 150 mile accomplishment. It has enriched me in so many ways and I have renewed faith in my personal fortitude. I am so grateful for all the magic of the Camino. I am so grateful for this life.

Diane you are amazing what a beautiful thing you have done .....bravo...what a life you have been having ...besos

You always bring tears.... I am so grateful you have done this and shared with us. I know you have found something you needed or wanted and didn't think you had. Now you know... I will always cheer you on and admire your courage and tenacity. Keep sharing your journeys with the world, we need to let you teach us... I LOVE YOU, my amazing sister !

I am so EXTREMELY proud of you! I LOVE you!
Dawn

You are amazing, well done

Greetings from Finland. It's very enjoyable to read your blog and follow your amazing journey.
Take care!
Juha

So proud of you, your courage, strength, determination, optimism, and creating community wherever you are!

You are loved tremendously!!!