I am lounging in my hotel room in El Puerto de Santa Maria in southwestern Spain recovering from a week working with VaughanTown in Belmonte, Spain. It was an extraordinary week, one I won't soon forget.
First, let me explain Vaughan Town. It is a program started by American Richard Vaughan (I'm told he's a Texan!) in 2001 to help Spaniards improve their English skills. We all meet up in the Spanish countryside, far from the distractions of the city to spend most every waking minute talking. We take walks and talk, we eat sumptuous meals and talk, we pick up the phone and talk, we sit in the bar and talk. And in the evening we have programs -  presentations, skits (all of us take part at some point), music. Every night was a surprise. Most of the Spaniards come at the behest of their companies or because of a desire to advance in business. We Anglos (and the Anglos this session included Englishmen, Canadians, Americans, Scottish and Australians) come for a myriad of reasons I'm sure, but its a nice perk to spend a week for free in a 4 star hotel with meals and wine included! We are responsible for the cost of transportation to Madrid and any extras like between meal snacks. I can't imagine how anyone could have needed extra food as the meals were wonderful and the servings large. But it was nice to sit in the bar and have a cafe con leche for an afternoon one on one session! VaughanTown has a number of venues in Spain, all within a few hours of Madrid. The program I attended was in Belmonte, about 90 minutes from Madrid. Belmonte is in the province of Cuenca, region of Castile-La Mancha. Yes, the Don Quixote La Mancha. 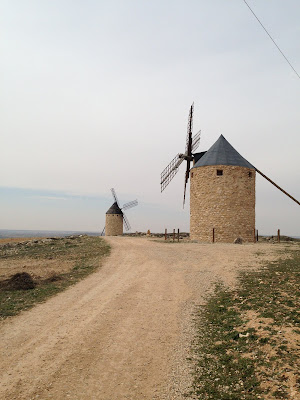 Tilting at Windmills
The village has a population of just over 2000 people and is basically an agricultural town. The Palacio del Infante Don Juan Manuel Hotel & Spa housed us all in grand style. The hotel is set in a 14th century palace and partial ruins of the palace are left untouched on the ground floor in stark contrast to the opulent hotel. 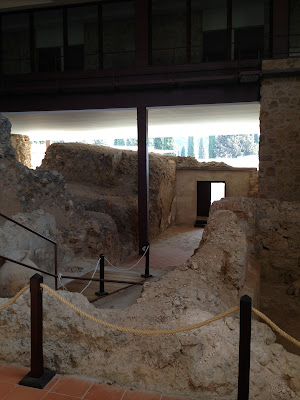 This area is a walkway from Reception to the spa and outdoor pool.
Every window of the hotel frames a spectacular view. 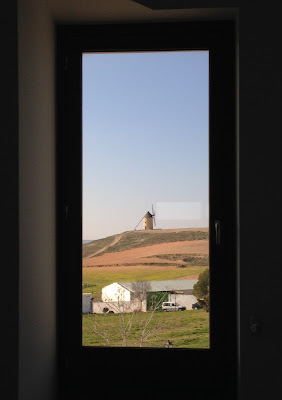 The view from the stairwell by my room.
The 15th century Belmonte Castle stands watch over Belmonte and also over the hotel. The 1961 movie, El Cid with Charlton Heston and Sophia Loren, was partially filmed at the castle. I was also told a battle scene from Lord of the Rings was filmed there, but I can't confirm that. Mid week, we walked to the castle for a tour. 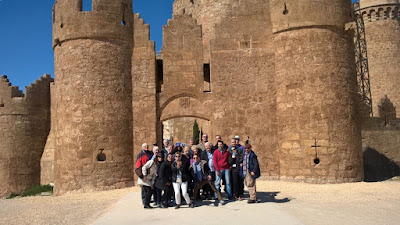 The crew in front of Belmonte Castle.
Every morning at 9 we would meet in the dining room for an expansive breakfast buffet and look over the schedule for that day. We usually sat at tables of four - at least one Spaniard at each table, but sometimes more. 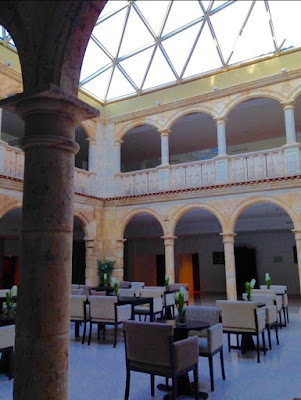 The breakfast room, not to be confused with the dining room!
At 10, we began our day with one on one sessions (50 minutes of talking wherever you wanted), conference calls (3 Spaniards and an Anglo in a meeting room on a speaker phone and an Anglo in their own room on the other end with a script), one on one calls (Spaniard and Anglo each in their own room talking on the phone) or in Rehearsal for the evening program. No Spanish speaking is allowed! In my one and only conference call, I was sitting on my bed listening to the Spaniards responding to a question I'd asked, when I accidently poured a glass of water over the phone while taking a drink. When I asked another question, I was told they couldn't understand me because, "It sounds like you're under water."! I loved the One on One sessions for it was the time you really got to know the Spaniards. You could talk about anything - although it was recommended to stay away from politics and religion. Of course, as soon as they knew I was from the USA, they'd ask about the upcoming election. Made for some lively conversations. As the week went on, our conversations got more personal and it was at that time that connections were made. Every day there were also one or more 50 minute "free time" sessions for Anglos, which were opportunities to walk into town, take a nap or pal around with another Anglo. Lunch was served at 2 and the seating arrangement was the same as breakfast - 1 or 2 Spaniards at each table of 4. Meals were lively affairs with lots of laughter and loud conversations. And lots of wine. I believe I drank more wine in my week at Belmonte than I did in the previous year! We had siesta after lunch for 60-90 minutes, then back at our 50 minute sessions until around 7 when Programs began. Carlota Romero was our Master of Ceremonies and she was a Master indeed. An actress by profession, she was like a firecracker and always had hilarious -and usually bawdy - skits and activities. We also had some Anglos give informative presentations - one on Niagara Falls and another on Guatemala as well as a funny explanation on the rules of the game of cricket! Dinner was at 9 (9??? That's WAY past my bedtime!) and we usually sat around talking till well after 10. Sometimes there was an optional event after dinner. On our last night, the Program consisted of each Spaniard presenting a 5 minute talk on a topic they had been given that morning. Some were comedic, some were touching, one in particular had quite a few of us openly sobbing. After dinner that night, we all headed to the on site bar and danced to loud Spanish music as well as Olivia Newton John singing songs from Grease (?) and some Abba (??). I mostly watched and enjoyed it immensely! There were some impressive dancers! I headed to my room a bit after 1 a.m. and at 1:30 was drawn to my open window to watch the diehards in our group raucously heading into the village to a small bar that was open till 4. Needless to say, some folks weren't at breakfast the next morning and the ones that made it were not very perky!
So here's my take on it. VaughanTown is a remarkable program that gives Anglos an opportunity to really get to know the Spanish culture and Spaniards a unique way to experience English language immersion. But it breaks your heart. I spent 6 days with 25 other souls in a glorious setting where we connected in an extraordinary way. And then, just like that, you disconnect. Friday afternoon I wrote in my journal, "It is a week that will change you and heal you and give you courage if you open your heart. It will fill you with laughter and tears and more love than you can hold. It will leave you oh so grateful and wanting more. It will fill your memory bank to overflowing and you will fall in love over and over and over again."
Some photos of a few of the participants. I wish I had a pic of each and every one! Especially our Master of Ceremonies, Carlota! I can't believe I missed taking a pic of her! 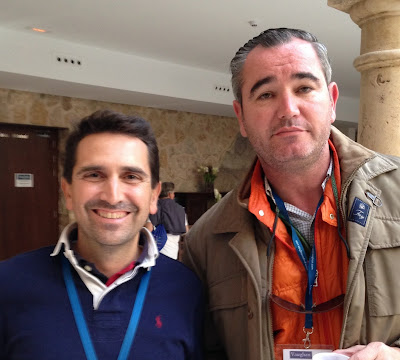 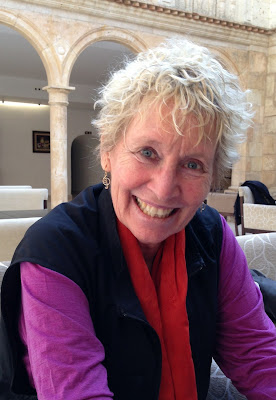 The artist Elin from California. She and I are heading to Morocco together in a few days! 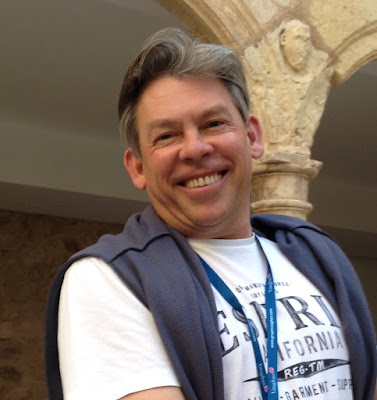 Enrique from Spain. What a smile! 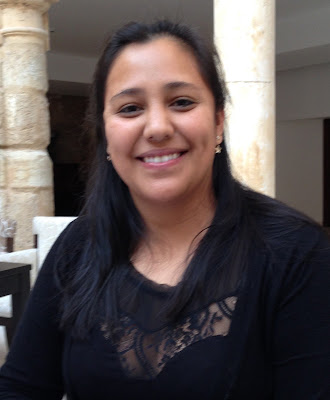 Diana from Guatemala. The completely amazing Program Director, she kept us in line and focused...mostly. 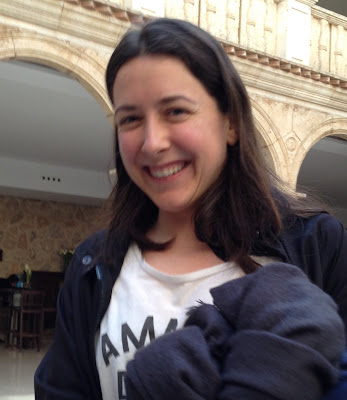 Sandra from Spain. She was shy, but so dedicated! 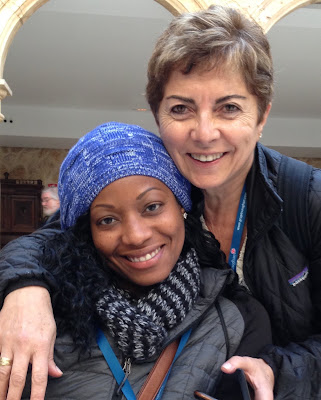 Renee from Los Angeles and Suna from Washington state. These were the first two people I met the day before the program started and they are both terrific dancers! 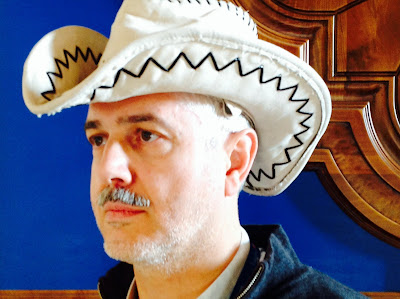 We broke into groups and were given a photo project. This is Jose as Vincent Van Gogh. 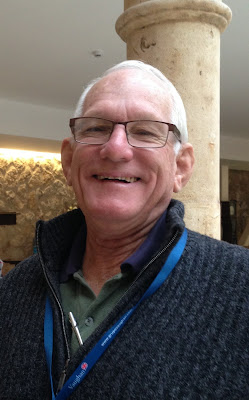 Frank was Australian and loads of fun! 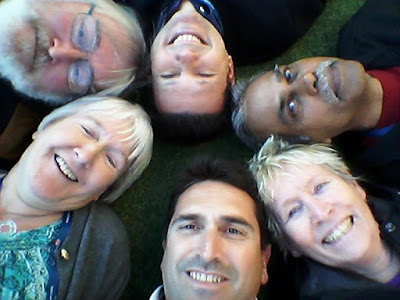 A group selfie from the photo project. Clockwise from top left: Martin from England, Paco from Spain, Afzar from Canada, Elin from California, Fernando from Spain and Rhona from Scotland. 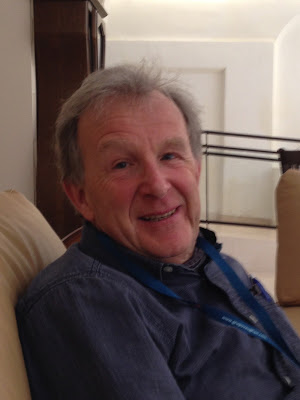 Brian from England. Like me, this was his first VaughanTown. Some Anglos have been a dozen times! 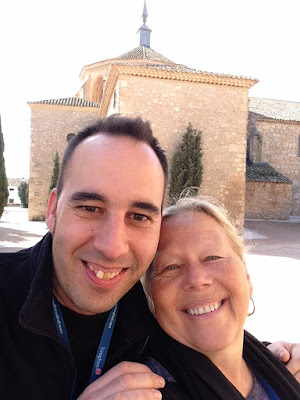 David from Spain and me! 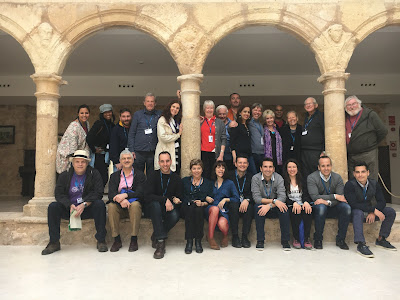 The whole group! The only pic I have of Carlota - she is in the front in the middle with the red stockings. Viva Carlota! And Viva VaughanTown! Until we meet again!

Love it, amazing week we had!

Love it, amazing week we had!

Cheers to an impressive writer who captures all our week in an excellent entry photos and all. From Elin soon to be Diane and Elin of Morocco. Best of the best to you.

Lovely ..... As always, so much fun to join you in your travels.
Stay safe and I LOVE YOU!
Dawn

Absolutely beautiful! It was such a blessing to meet you!

Just got your blog-dress from Ellen and Lily (we're having brunch at Sage and Billy's new home, and Ellen's). You know how I love recipes, guess I need to start a blog! I've been following you thru Ellen. If you're going to Barcelona, LMK. My friend Melanie and her daughters live there. Would love to visit. Mel's been there for 20 years. I check e-mails regularly and facePlant. I'm moving my furnishings back into my house in Sherman and looking for a roommate. still want to live in the Hill Country, maybe Llano. Love you. Have fun. C ya.

I am about to go to Belmonte on a Vaughan Town 50-50. Your post has made me look forward to it all the more.

Diane, I was so happy to receive the link to your blog from our mutual friend Elin and I loved reading about your experience. In the paragraph where you summed up your adventure, you expressed so beautifully what is in my heart about VT. My husband and I have been to two Vaughantowns and both were extraordinary; not a day goes by that I don't have some contact with an Anglo or Spaniard and they will be friends for life. We are planning to go back next year; maybe we will meet you then!!