No, I did not get arrested for jaywalking or even for wearing ugly shoes (which just might be a criminal offense in Milan)!
My plan for my last day in Milan was to trek down to the train station to buy my ticket to Marseille and then go visit the Cemetario Monumentale. Opened in 1866, the Monument Cemetery is an amazing collection of Italian sculptures and fantastic tombstones representing some of the best of Italian artists. This sunny day seemed the perfect time to wander the grounds. Upon visiting their website, I discovered the only day they are closed are Mondays! Bah! I then received an email from my friends Grace and George with an article from The New York Times about a restaurant on the grounds of Bollate Penitentiary on the outskirts of Milan. All the cooks, waiters and dishwashers are inmates at the prison and it is a grand experiment in inmate rehabilitation. The article stated that dinner for the month of March was almost fully booked, but never mentioned lunch. I immediately emailed the restaurant, named InGalera (Italian slang for In Prison) and within 15 minutes received a reply that they did indeed have an opening for lunch. Please send my phone number. I emailed back the number at the hostel and soon Silvia Polleri called to confirm my reservation. I took off soon after with plenty of time to make my 1:00 reservation. The train station ticket office was packed, but by 12:20 I was on the metro headed to the outskirts of Milan. It was a long haul and included getting off the green line and catching the red line to the last stop in western Milan, RHO Fiera. At 12:55 I hopped in a taxi and told the driver, "Carcere Bollate, per favore." (Prison Bollate, please) He looked at me for a moment, then asked, "The restaurant? I've heard it is good." And off we went. He dropped me outside the main gate and as I entered the guardhouse, I was met by a gentleman in a suit who asked my name. When I told him, he checked my name off a list and told me to follow him and just like that I was within the prison gate. He was an amiable man and was delighted when I told him I was from Texas. He walked me to the front door of the restaurant and all of a sudden the barbed wire topped fences were replaced with the hush you feel when surrounded by elegance. Not over the top like a 4 star hotel, but a subdued tastefulness that I didn't expect to find in a penitentiary. 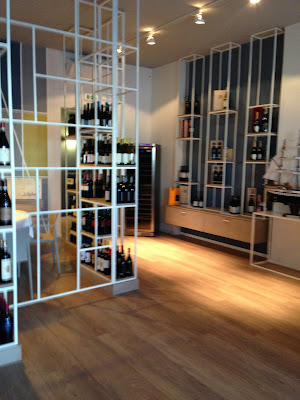 Wooden floors and floor to ceiling open shelving holding hundreds of bottles of wine. I was shown to my table for one between a table of three men in business suits and another that seated three smartly dressed women and a man in jeans. They looked at my shoes. I felt slightly underdressed. The gentleman who had met me in the guardhouse told the table of four I was from Texas like it was a big deal. I was mildly mortified, but smiled all the same. I was glad when a waiter/inmate came and handed me a menu and asked what I'd like to drink. After bringing my sparkling water and a basket of rolls, I saw all the posters mounted on the walls were from prison movies - Clint Eastwood in Escape from Alcatraz, Tom Hanks in The Green Mile and Tim Robbins in The Shawshank Redemption - but in Italy it was released as Le Ali Della Liberta', The Wings of Freedom.
I ordered Bruschetta Mediterranee and Spiedo de Pesce. 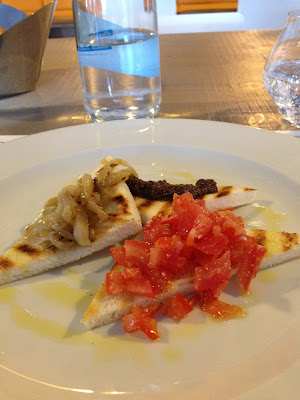 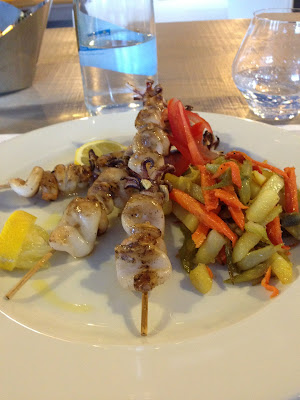 Skewers of Fish
Service was fast and the meal was remarkably good! The humble vegetables - potatoes, carrots and celery - were prepared so perfectly that I enjoyed them almost as much as the skewers of shrimp, squid and octopus!
I was almost done eating when Silvia Polleri, the manager of InGalera came to my table. She welcomed me and asked how I enjoyed the meal. I told her I was wonderfully surprised. She took a seat across from me and asked if I had seen the article in The New York Times and when I answered yes, she smiled broadly. I was the first customer as a result of the article published that morning. We talked for a few minutes when she stood up and said, "A picture!". I handed her my phone and she instructed a guest at the next table to take a photo of us. 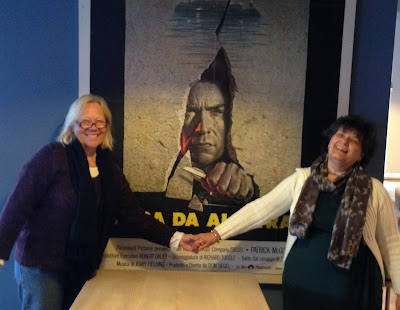 Silvia Pollari and me in front of the Escape from Alcatraz poster. She grabbed a stack of papers, came back to my table and proceeded to give me a copy of each different placemat they have - all with photos of different prisons around the world! I was one of the last patrons in the restaurant and asked to take a picture of the staff before I left. They gladly obliged. 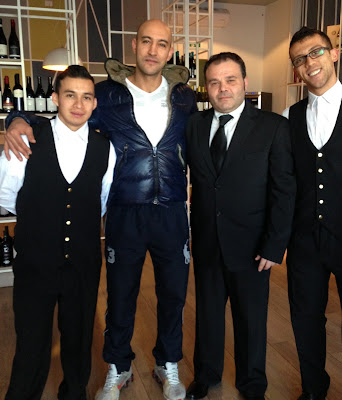 The man with the tie met me at the guardhouse. The other three are inmates at Bollate.
The meal was fairly inexpensive (indeed, the taxi to and from the metro was almost the same price as my lunch!) and very well prepared and plated. The entire staff was professional, friendly and seemed happy to be doing this work. It was a wonderful experience. Thanks Grace and George for the very serendipitous email! Read The New York Times article here:
www.nytimes.com/2016/03/06/world/europe/in-milan-diners-go-to-prison-to-get-a-good-meal.html

What an unexpected, amazing adventure!! The meal looked wonderful! You are Blessed!!

How amazing....
As expected, you brought a smile to my face. Bravo
I LOVE you!
Dawn

Such a blessing to be able to keep yourself open to new and unplanned adventures. Bravo!!!

What an adventure! I once had a chance to sleep in a prison that had been converted into a b&b in S. Africa. I wanted to just for the experience and stories of having done it, but those with me declined. And so, we probably got a better night's sleep, not only from the vibes, but also because of the soccer team that was also staying there. (sound REALLY travels well through the stone walls.) Lunch is a better choice! It would be cool to implement such a program here.

This is a a great true story. You are no longer a novice but a savvy lone adventurer with a beast

Love the story as much as the idea!