Scott and I had the pleasure of volunteering for two days last week at Garrison Brothers in Hye, Texas. I still feel a bit guilty calling it volunteering, cuz it was more fun than any volunteering I usually do (hey Juanita-I LOVE volunteering for the food bank, but I don't get a signed bottle of bourbon for it...just sayin'...)!
For two days we helped bottle the Spring 2011 release of Garrison Brothers extraordinary Texas Bourbon.
Four or five years ago, Scott and I took a road trip to Ohio for a weekend at the races. We left a few days early, so we could meander through a part of the country we hadn't seen before. Part of our vacation was visiting the Kentucky Bourbon Trail. We toured 4 or 5 distilleries and we were struck by how often we heard that Kentucky Bourbon was so good because of the clean, limestone water. Scott kept saying, "Our Hill Country water is limestone water and real tasty. Why isn't someone making Texas Hill Country Bourbon?" Well, someone else was thinking the same way and Garrison Brothers was born. If you get a chance to tour the distillery, do it. It is an incredible set up on a beautiful rolling hilled ranch just off Hwy. 290 about halfway between Stonewall and Johnson City. There is lots of expansion going on about now, so pardon their dust-just realize it will make more of this phenomenal product available. Here's the scoop: Dan Garrison uses #1 food grade organic grain. The corn is grown in Hereford County in Texas, the barley is from the Pacific Northwest and the winter wheat is grown on site. They use rainwater they harvest off the roof of the distillery and they filter it several times until it is incredibly pure. Garrison Brothers is the first new Bourbon distillery opened in America since before Prohibition AND the first legal (I guess LEGAL is the operative word here) whiskey distillery in Texas history AND the first Bourbon anywhere made entirely from organic grain. That's a lot of firsts! We weren't sure what to expect when we volunteered. We dressed in work clothes and comfortable shoes. As we drove onto the ranch, we were met just inside the gate by a man with a broad smile driving a pick-up truck. He rolled down his window and said, "You two look like professional Bourbon bottlers..." He gave us directions to the bottling facility and drove on to meet the other volunteer coming through the gate behind us. We walked into the distillery and were met by a room full of smiling employees. These folks LOVE their work. They understand the importance of what they are accomplishing and the superior quality of their product. The pride is palpable. Up to this point, they have been using a 100 gallon still (named "Cowgirl"). She's a beauty. 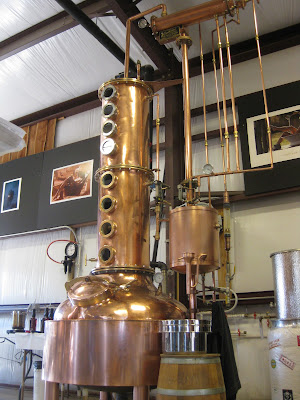 Now Cowgirl shares the room with 2-500 gallon stills. Just as beautiful, but really big! She looks positively petite compared to the big fellas. 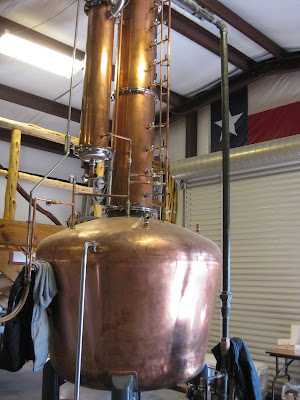 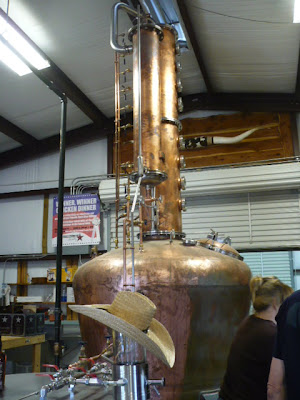 See the sombrero in the foreground of the pic above? As a celebration of Texas Independence Day, Dan gave that hat as a prize to the best bottler of the day. Guess who won? 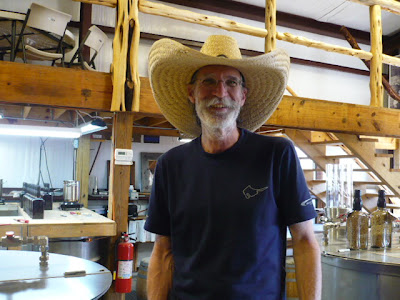 Scott and I didn't actually bottle the bourbon. The machine that dispenses the bourbon into the bottles was run by an employee. Then each bottle was corked and Scott and I (and Tyler, the other volunteer) sealed each bottle by hand. Bottles waiting for our handiwork. 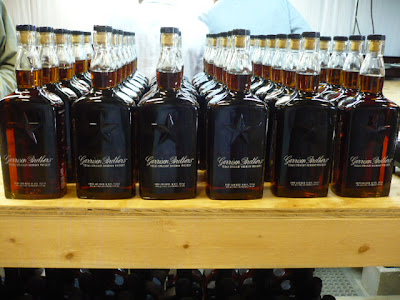 Here was the process: first the pigtail-deer hide cut in strips, dipped in hot wax and applied where the cork meets the bottle. It was wrapped around until it forms a seal of sorts. A small piece is left hanging to open the bottle after it is waxed. 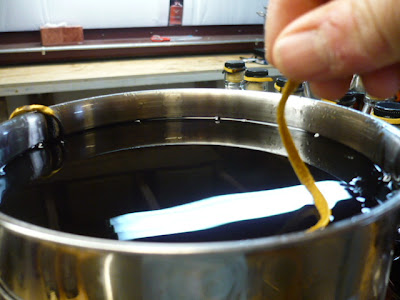 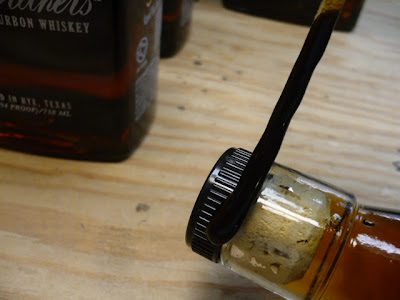 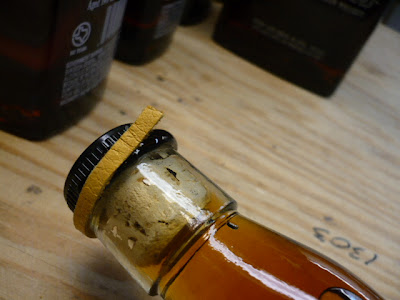 Now the waxing. It wasn't until the second day that I felt I had the knack. And boy, the pride at this place was contageous! The second day I wanted to crow about my waxing (or maybe I wanted to wax poetic about my waxing!). I think I had the best teacher in the place, Laurel Hoekstra. She gave me a few tips that made all the difference in the quality of my work. I wasn't as proficient at doing the pigtails...so I had Scott do the pigtails and I waxed. His pigtails were perfect. Since I wax my balsamic syrup bottles, I thought I'd have waxing down, but this was way different. All the pigtailed bottles waiting to be waxed: 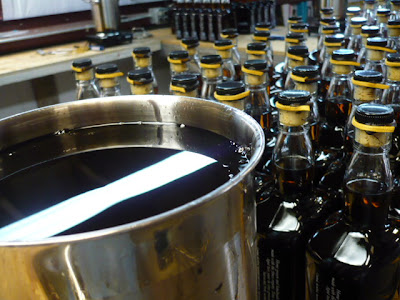 Letting the excess wax drip off. 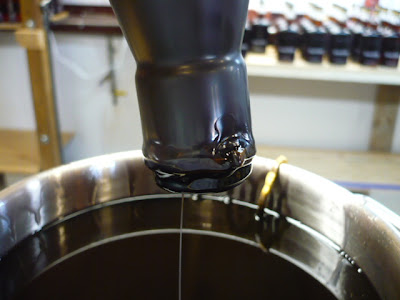 And the finishing touch...the Texas star on top!
The bottle in the foreground is ready for the star stamp. 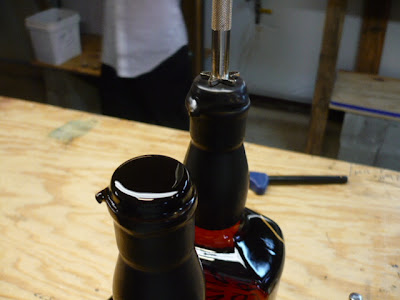 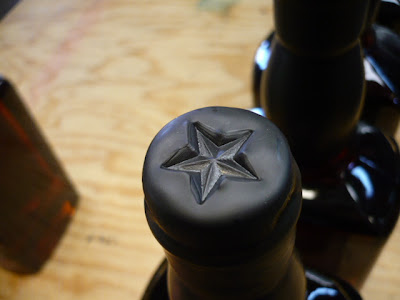 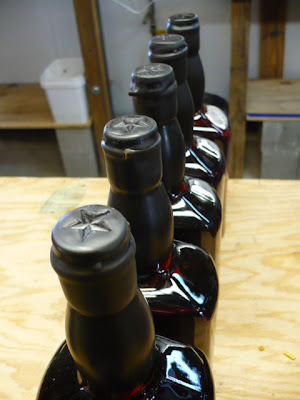 Laurel Hoekstra and the famous Dan Garrison cleaning and packing finished bottles of the best bourbon you'll ever taste. Honest! Dan personally signs EVERY SINGLE BOTTLE! He is crazy Amazing!! We were involved in the tail end of the bottling-finishing up the 2011 release on March 3rd. They had been bottling for weeks. I am glad we were the last volunteer group...just seemed significant somehow. 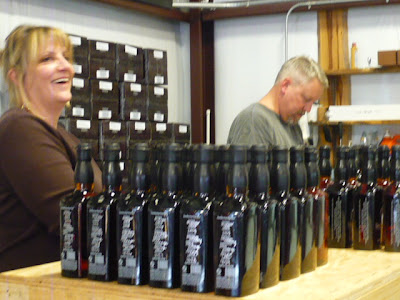 Yeah, I know the quality of this picture isn't good...sorry!
We worked for two days and driving home each afternoon, Scott and I talked about how fortunate we felt that they let us be a part of their endeavor. (Kinda' rings of Huck Finn, huh?) These folks are so earnest and sincere, you can't help but admire them.
The bottling we did will be released to stores in Central Texas around March 16th. They are distributed by Republic National Distributing Co. You can call your local liquor store and see if they will be carrying it. Or call Republic to reserve a bottle-210-224-7531 (San Antonio) or 512-834-9742 (Austin).
Their website:  http://www.garrisonbros.com/
If you like Bourbon-or even if you don't like it, but want to-try Texas made Garrison Brothers Bourbon.
Taste the magnificence!
I'm going to have a sip right now...
Posted by diane at 8:53 PM