What a week! Our friends Cal & Leslie arrived for a visit last Tuesday...they drop in a couple times a year and it's always such a pleasure to spend time with them. We never really know how long they are going to stay and that's fine. Now you know what kind of folks they are because I can think of MANY acquaintances with whom that WOULD NOT be fine. 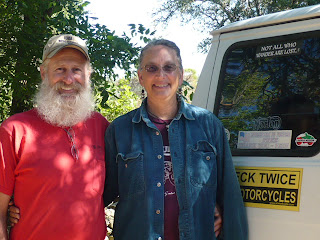 They spirited Scott away to North Texas to the races where they all worked for the weekend. I was supposed to go with them, but stayed home to tend to animals and the garden. They had a great time with Friday and Saturday being sunny and warm and terrific race weather. Then the wind changed late Saturday afternoon and Sunday was a different story. Cold and windy and just this side of miserable. They were supposed to stay Sunday night also, but decided to head home to sleep in a warm bed. Scott on Sunday at the races. Brrrr 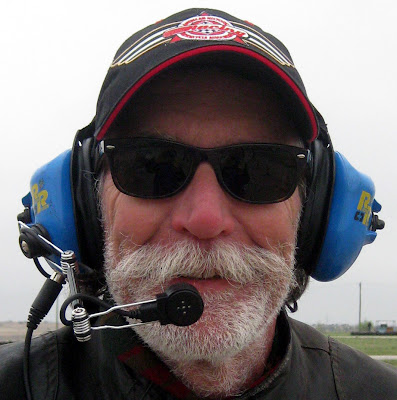 They left on Scott's birthday, so we postponed his celebration until last night. I roasted up a pork loin (as I put it on the table I said, "Here is Kevin for dinner!") and Skip brought some incredibly good fish fillets with roasted peppers/onions/garlic and an equally incredible yogurt sauce (plain yogurt, horseradish, lime juice and chopped cilantro). 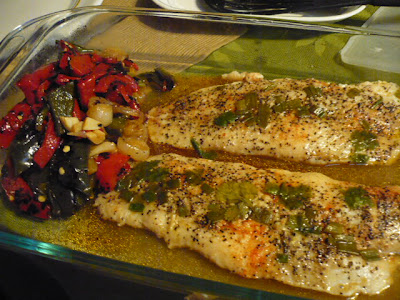 I roasted some broccoli, baked up some sweet potatoes and made Parmesan Gougeres (savory cream puffs). For dessert we had a 3 layer Carrot Cake that my grand daughter Natalie (Chef Andre) helped me make over the weekend.
Oh! The weekend! With an empty house on Thursday I got busy. Had a load of compost delivered (not long after Scott, Cal and Leslie drove away) and I shoveled compost all afternoon and into the evening until I couldn't see anymore. Stayed up really late that night finishing up my taxes (hello 3 a.m.) and then worked in the garden again most of the day Friday. Got a huge bed all seeded with a variety of greens and watered the orchard.
Scott and I potted up 12 cherry trees and 7 peach trees a few weeks ago which will go into the orchard next Spring. Friends Hal and April in Comfort told me about these cherry trees (which are really cherry shrubs) and gave me a jar of jam April had made from the cherries. These are not sweet, pick and eat cherries, but really sour cooking cherries. So tasty and prolific and they grow really well in our area.
I had a watercolor painting class with Jeannette MacDougall Saturday in Boerne and then picked up my dear sweet Natalie for an overnight visit. We had lots of fun Saturday afternoon running around outside-she found a rope and tied my hands together and then tied the other end of the rope to various things. I was a "cattle wrestler" (that's her interpretation of "cattle rustler") and she was the sheriff and, with her trusty sidekick, Depity (deputy) Sophie, they were trying to keep me in line. While I was tied to the front door (would I kid about something like this? really?) I could hear thunder in the distance and admit to being a bit puzzled...there was no rain in the forecast. When I finally convinced her to untie me (not an easy task, vigilant sheriff that she was), I went inside and checked the weather and there was a weather warning-severe thunderstorms with up to 1/2" hail.  What?! I headed outside and with Nat's help covered up the cars with special attention to windshields and sunroofs. The thunder got louder and then it started raining. We sat on the porch and watched...all 4 1/2 minutes of it. Okay...
At this point I decided I would uncover the cars in the morning and, after putting up chickens we went inside to watch a movie. As we sat eating popcorn and watching the movie I started to observe lightening all around. Then the rain started again-heavy this time-and the electricity went out. Within seconds the hail started-what a cacophony! It scared Natalie and she started to cry. We grabbed a flashlight and went to the front door and I showed her the hail. She said, "Gramma, ice balls falling from the sky?" I had to go outside and retrieve some before she would believe me. She was amazed. I told her she'd have to tell her class about the "ice balls" Monday at school. She said, "I can't tell them because they won't believe me..." It is moments like this that make being a grandparent (or a parent for that matter) so very cool. We lit candles and sat talking until the lights came back on and we could finish watching the movie. The hail piled up outside. Sophie came in and hid in the closet, curled up in a tight, little ball (which Natalie found hilarious). I kept thinking about my garden and the dozen cherry trees in pots outside. The hail finally stopped and Nat fell asleep. I turned everything off and went to bed and the hail started up again. It rained all night. 1 3/4" total in precipitation. Most rain we've had so far this year. Everything survived with very little damage. Just short of a miracle in my opinion. The next morning Nat woke up and told me, "That was quite a night..." Yes, dear Natalie, it certainly was.
Today is our anniversary. Eight years and it has been (and continues to be) a wonderful adventure. I know it is not easy being married to me. Last year I read of an exercise a marriage counselor uses. It consisted of imagining being your spouse and describing what it is like being married to you. I CANNOT do this exercise. I have tried a few times and I break out in a sweat. Understand, I am not doing this with Scott, just by myself, for myself. It is unnerving-still, every few months I try again. So I am grateful that we have as much fun as we have and as few disagreements as we do.
For a special anniversary lunch this afternoon I made Laurel's Asparagus Benedict: http://unamericanaincucina.com/
I made a few changes..I roasted the asparagus, my preferred way of eating it. I roast it on a grill pan. 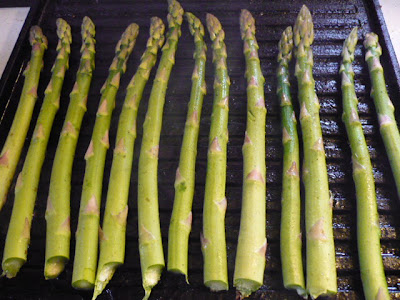 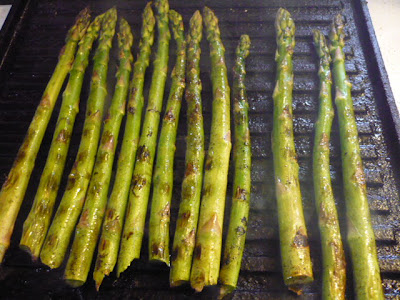 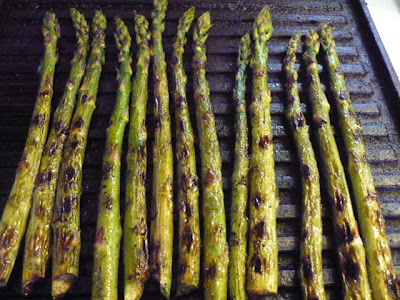 I used my homemade whole wheat bread because it was what I had (she uses rye which sounds really good for this recipe). I also used white wine instead of water in the Hollandaise. Nice...
This Hollandaise recipe is quick and foolproof. Just watch out when you are whisking the egg yolks over the double boiler to keep the heat low-or you will end up with scrambled eggs as she warns in the recipe!
The finished dish...it went over REALLY well...smile... 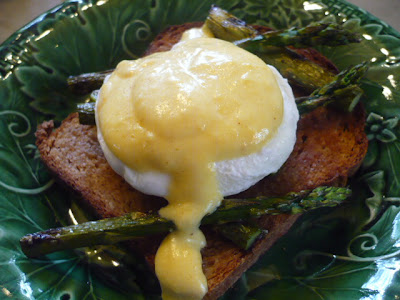 We are going out for dinner with Leslie & Cal this evening at Navajo Grill. This is one of our favorite places to eat in Fredericksburg. We split their Artisan Cheese Plate and order a House Salad each and we are comfortably full and very satisfied. Everything fresh and elegant and it makes for an inexpensive treat in beautiful (but not stuffy) surroundings. A good place for a celebratory meal or to take clients. Mike (the owner) is a gem and his son is the chef!
Life is good-my husband is a year older (and my milestone is right around the corner), we have another year of marriage under our belts and good energy going for the next one. I am in constant surprise at our good fortune.
On another note-I've been asked by a few folks when I was going to post about butchering our pig, Kevin. I just don't think I am. It was a bittersweet experience...a days worth (and beyond) of really hard physical work and now, a freezer full of high quality pork. Scott sent out this email after the main butchering was completed and we had moved the process into the kitchen to start on the secondary processes:
diane and i spent 6 hours today butchering our pig, kevin
having killed and butchered plenty of wild game the mechanics were
pretty straightforward
killing an animal we came to know, one that came when you called
was a bit harder.
i didn't think there would be an emotional attachment
but there was some sadness
the death was quick and painless
with wild game there is no emotional attachment
killing is done at a distance
this was quite different
while we have joked about kevin bacon and naming future pigs hamlet, etc
i don't think we will name any more
we gave kevin thanks for providing our sustenance
and look forward to sharing our bounty with family and friends
we have peace of mind knowing the diet and raising conditions
have been healthy for kevin
it has been a couple years or more since we bought meat at a store
not knowing how it was raised or processed
kevin dressed out at roughly 180# and is currently on ice
much work still to do to trim the meat, wrap and freeze portions
sort scraps for a variety of sausage, render the lard, make bacon, etc
and begin the long dry curing process to make the hams into prosciutto
Posted by diane at 5:20 PM

Love you mommy!! Happy Anniversary to you and Potter!!!
XOXO
lily-bean