I took a hog butchering class Nov. 14th in Austin with Jesse Griffiths of Dai Due fame (http://daidueaustin.com/).  Jesse puts out amazing spreads with the Dai Due Supper Club on a regular basis and has a whole line of tantalizing food products.  You can find him most every Saturday at one of Austins' many Farmers Markets.  I wasn't sure what to expect when I walked in the door of the Spirited Food Company, but was greeted with a small, very clean kitchen and lots of activity.  Having worked in commercial kitchens most of my adult life, it felt warm and comfortable.  Some of the students had already arrived and I sat in a small break room with them to fill out my paperwork (a disclaimer so if I cut off a finger Jesse wouldn't be responsible) and visit a bit.  Soon we were ushered into the far side of the kitchen and lined up against a wall in front of a stainless table.  Over the next 5 1/2 hours we would experience the alchemy that is butchering.  Just to start I want to say that the hog that was brought to the table was already killed, gutted and skinned.  In fact, it was only HALF a hog.  And it was HUGE!  It took two folks to carry this half hog out of the cooler to the table. 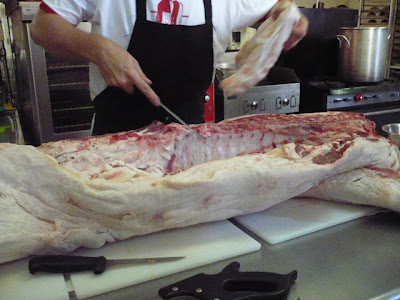 This is Jesse removing the first piece of leaf lard from the hog. This fat from around the kidneys was snowy white and soft like butter. This is the lard that is prized for making the very best pastry crusts.  The lard (all the fat including the leaf lard and backfat) from one hog could probably supply a family with fat (for what one would generally use in cooking oil) for an entire year.  You can read about lard here: http://www.slate.com/id/2219314/ 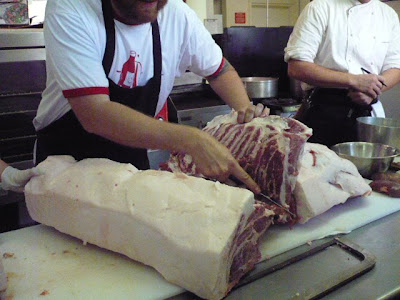 Here Jesse is cutting the pork loin away from the ribs. The loin was huge-much bigger than any I've seen. I generally buy a whole loin, cut it into some chops, some medallions and a few roasts and have pork for Scott and I for 6 months.  This loin would have lasted us much more than a year.  Much of the fat was trimmed away and thrown in a pot on the stove for rendering.  Look at how clean and beautiful the lard is! 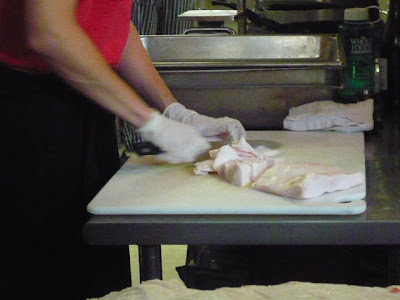 Getting ready to butterfly the loin and stuff it with fresh herbs before roasting: 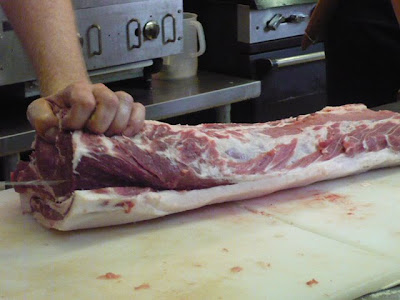 I wish I had taken better notes...in this picture you can see what is known as "Baby Back Ribs", "Spare Ribs" and "St. Louis Style Ribs"; but I can't remember which is which. 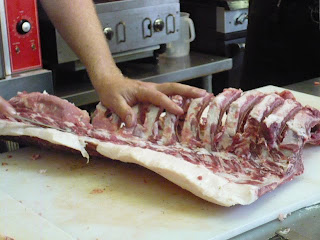 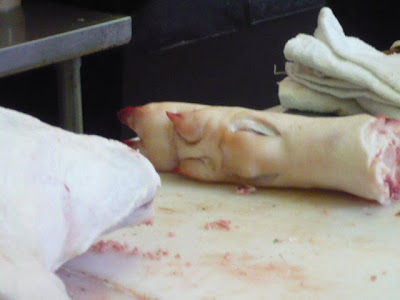 It looks so pristine.  It makes me recall my love of the chicken feet when we butchered our chickens-read about it here: 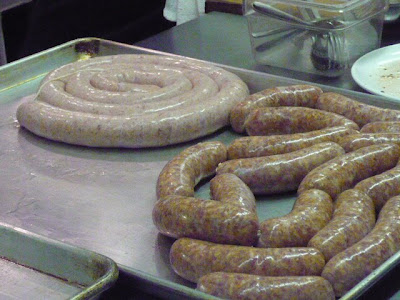 Sausage!  Yes, this was made on the spot.  The pork was chilled, ground up-a mix of 30% fat to 70% lean-seasoned very well and then it was stuffed into the casing.  It was so much magic.  We made boudin blanc, kielbasa and chorizo.   Being a resident of Texas for over 30 years, I have had my share of chorizo.  Some of it has been pretty darn good, but an almost equal amount has been overly greasy and not very tasty.  I ate the best chorizo of my life at the Whole Hog class.  I really want to make some chorizo with the recipe Jesse gave out.  It was as close to perfect as I could imagine.  We also made blood sausage.  It was a fascinating process, but not something I would make at home, unlike all the other sausages.  It's a texture thing and not at all related to the fact that it is essentially blood, seasoned and poured into a casing (it greatly resembled a red water balloon) and simmered until it turns black and firm.  I did try a bite, but it did nothing for me-really it was the texture that threw me.  Here's the process of making blood sausage: 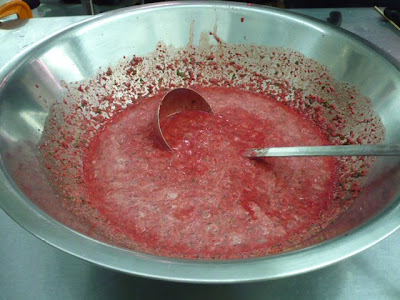 And then it was ladled into the casing: 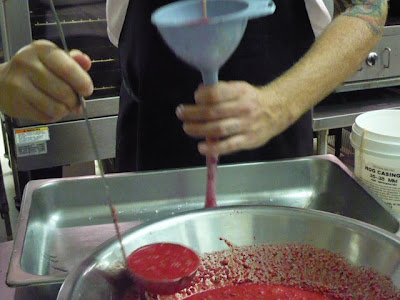 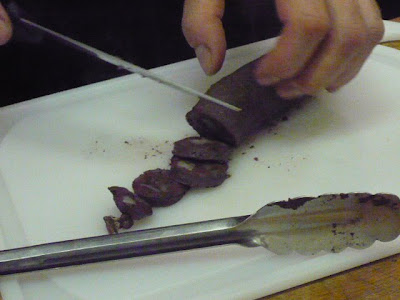 We also made head cheese, which I have always thought was pretty gross, but this was really good.  And yes, Jesse brought the entire hog head to the table and it was completely picked over for the cheese (which isn't cheese at all, but almost a pate of sorts).  There was lots of meat on the head and he even diced up the ears.

I've covered maybe 15% of the class here...it was so much information it made my head spin!  But it really inspired me-I can't wait to make some sausage!

Jesse offers these classes once or twice a year I believe.

I have a whole new appreciation of pork and even more, of butchering.  My uncle was a butcher most all his life and he told me stories that were chilling and probably resulted in me being a vegetarian for almost 15 years!  After the Whole Hog class, I feel good about the meat we eat and more determined than ever to find clean, humanely raised pork.  Jesse made it easy with an entire page of sources in Texas, including the one where "our" hog came from-Richardson Farm just outside Austin.  They sell at the Sunset Valley Farmers Market and can be reached at 512.446.2306.  They also sell grass and grain fed beef and chicken.

The bottom line for me is that I know the source of all the meat we now eat at home.  It has been a process of almost a year to get to this point, but it has been worth it.  And I feel like it is getting easier and easier to find good, clean sources.

From beef to pork, chicken to lamb, even rabbit-ALL is available locally and at reasonable prices.  And it is infinitely better tasting than what I have purchased for years from the market.
Meat eating has become a joy again.

I am Dave a Laverda nut like Scott, I sent him a link to my wifes blog so he sent me a link to yours. My comments are on 'blood sausage' I grew up poor in the north of England so we ate a lot of blood sausage known as Black Pudding. Every few years when I make it back to the old country I usually have at least one breakfast that includes Black Pudding. Its pretty revolting stuff but I still remember loving it as a kid but hey we were poor and hungry. Never seen the stuff in the US.