Life Gets In The Way

It's been almost 2 months since I've written here.  So much has been going on and I've been wanting to write about it, but life kept getting in the way. One thing seemed to pile onto the next thing and then more piled on top of that and I am just now finding the wherewithal to dig myself out the teeniest bit and get some of it down here.  I find that I use this blog as a kind of e-mail site where, when my life (the backed up e-mails) gets too full, I can download it here and feel better about my lightened load.

The ranch was the big focus the end of September and the beginning of October.  Mostly because the house almost fell down.  Okay, okay, that's a bit dramatic, but it could've happened.  We have known for about a year that we had a problem with the floor joists in the living room.  There are a pair of French doors that open to a semi circular set of rock stairs that go out into the yard.  Well, there WAS a set of rock stairs...we spent 2 days with rock hammers and sledge hammers and destroyed them.  I had always liked these stairs.  I liked the semi circle, I liked the wide bottom stair, I liked that I could sit here in the summer shaded by the big oak and gaze out to the hills in the south.  And now they are no more. 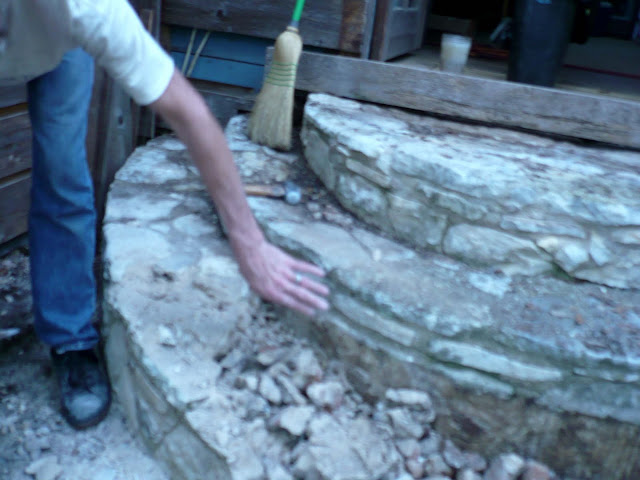 The stairs were built right against the house and the bottom sill was never flashed, so whenever it rained, all the water rolled off the steps (which over the years had sunk slightly TOWARDS the house) and onto the bottom sill and then traveled along the joists.  The bottom sill, a double 2x6 sandwiched with a piece of plywood between, was so rotted that only about an inch remained and the joists, also terribly rotted, were not even sitting on the sill anymore.  When we took up the floor by the French doors and peered down, our blood ran cold.  I was afraid to move for fear that any pressure on the sill would snap the last remaining bit.  This sill holds up 2 stories of the house. Lily was warned NOT to do calesthenics in her room or jump on the bed.  Not that she ever did, but now was not the time to start.  Scott called on our friend and neighbor Jack to come help with the repair.  We knew it would involve jacking up the house and replacing the sill and scabbing the joist, but we were unsure what else we would find when we removed all the siding on that part of the house.  Jack told me later that when he saw the damage he was real concerned and awoke in the middle of the night fearing it was a bigger job than he and Scott could fix.  I was awake that same night worrying that Sophie, our big dog, would chase a possum or raccoon under the house and break the sill causing the house to tumble down.  Not very probable, but things always seem bigger and scarier in the middle of the night.  Amazingly enough, in 4 days the repair was complete, the floor put back in and the floor no longer shook when we walked on that part of the floor.  I often feel that this house is more of a piece of work than we are up to taking on.  It was put together in pieces- first one room, then years later a few more, then yet another section a decade later.  It is a 2 story house built on 3 levels.  Even the second floor is odd-at the landing of the stairs you step down into one bedroom and up into the other.  It feels like lately things have gotten more and more out of control with the house.  The kitchen roof has always leaked a little, but lately it has become a sieve.  We cannot put enough buckets out to catch all the drips and some drips have become deluges...rain pouring down the wall or a steady stream from the ceiling.  So next on the agenda is putting a new roof on the kitchen.  Jack will be here Monday to start ripping off the old.  Who knows what we will find?

At the end of October, Scott and I always help with the Harvest Classic, a motorcycle show held at Luckenbach that benefits Candlelighters Childhood Cancer Foundation (http://www.harvestclassic.org/).  In the 6 years of the show, the Harvest has donated over $145,000 to this worthwhile organization.  Scott runs around doing whatever needs to be done and I am on the food crew.  It is a fun and long weekend.  I usually bake about 500-700 cookies for the Saturday night bar-b-que dinner-this year, I ran out of time and only made 480.  We ran out early.  Bah!

Our wonderful friend Claudio rode his bike out from Houston and met us at the Harvest on Saturday.  We hadn't seen him since the beginning of August, so we invited him to spend the night.  We finished at the Harvest at around 10 that night and Scott and Claudio started home on their bikes.  I followed about 5 minutes behind in the car.  I rounded a corner on the narrow, winding back road we take to get home when I saw headlights up ahead facing towards me on my side of the road.  As Scott was riding down the road with Claudio following, a huge deer ran out directly into his path.  He had no where to go and he hit the deer, which ran to the side of the road before collapsing.  Scott flew over the handlebars and the bike fell on its side and slid 85 feet.  When I got there, Scott had already picked up the bike and was standing there a bit dazed (to say the least).  Claudio was quite shook up and we decided he would stay with the bike while we went back to the Harvest to get the trailer and truck and come back and load the bike.  The first thing Scott said when he got in the truck was he thought he broke his collarbone.  By the time we returned to Luckenbach, Scott was very pale and somewhat confused.  I ran to get help and by the time we all got back he was out of the car, slumped over the hood of the truck.  It was decided a trip to the Emergency Room was in order.  Well, he did indeed break his collarbone and had quite an array of bruises and we finally made it home around 2 the next morning.  The guys at the show went and loaded the bike and hauled it back to the Harvest.  The next day they proceeded to pack up all our stuff (we had 3 bikes out there) and bring truck and loaded trailer back to our place.  What a group!!  Scott is doing much better now, almost 2 weeks after the accident.  Thank goodness for helmets!

I have been feeling quite overwhelmed and just today, on the verge of a freak out, headed out to the garden.  I hadn't been out there with my fingers in the soil for almost 2 weeks.  It is an odd thing that now, the beginning of November, I have tomatoes, eggplants, basil and peppers growing but also cauliflower, cabbage, fennel and broccoli!  The arugula and the cilantro are fighting it out as groundcover and the pomegranite tree has begun blooming all over again!  Days are warm and sunny and nights are quite cool...sometimes hitting the upper 30's.

My strange and wonderful bean plant has grown so big that the beans look unreal. 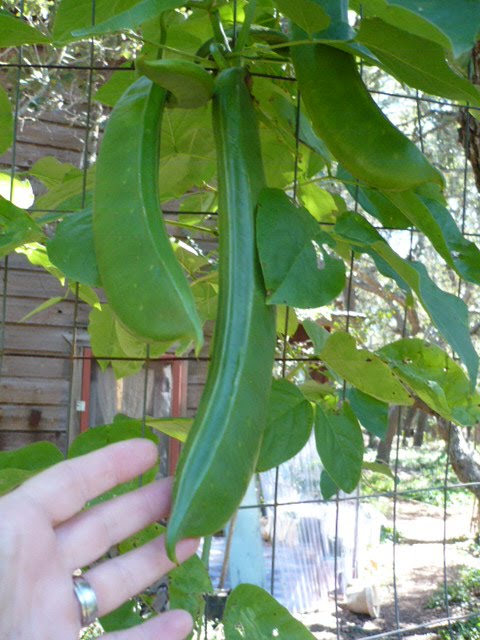 I picked eggplants, tomatoes, basil and baby leeks and put them on a pizza for lunch today.  It was so good and summery. 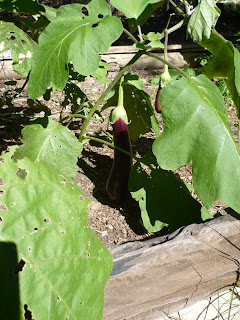 The eggplants haven't put on all summer and now, on the cusp of cold weather, they are full of fruit and blooms.  I have to figure out SOMETHING to do with all the arugula. It is so thick that when I pick you can't tell-it all just fills in.  Brussels sprouts have tiny sprouts along the stem and the cabbages are forming nice, firm heads.  I think we will have a nice bounty in a few months.

In anticipation of tearing down the greenhouse (the plastic greenhouse sheathing with the 4 year guarantee barely lasted 2), I repotted the papaya trees we grew from seed 2 years ago.  They are as tall as I am.  They started in the compost from a papaya Scott ate.  They must really like it here. 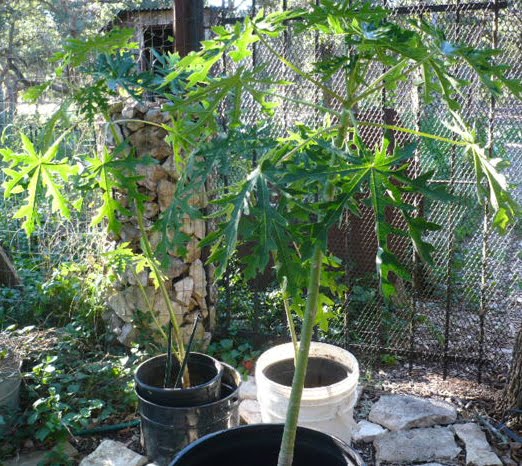 So, now with the garden therapy back on track, I feel better.  Still overwhelmed, still feeling like I need someone to come into the house and clear it all out for us-have an auction, a garage sale or a bonfire-anything to unclutter it all.  There should be a law against two pack rats living in the same house.  But I suppose cold weather will come eventually and I will be sequestered inside with nothing to do (yeah, right...) and I can start filling boxes for the thrift store.  In the meantime, if anyone needs anything, really...anything at all, I'm sure I can find it here and donate it to you.  I'm sure you need it (whatever it is) more than me.

Wow, your life is really busy these days. Hope Scott is doing o.k. again! Also hope the kittchen is sealed again.
We ´re sending good thoughts to both of you so that life gets easy again.
A big hug and greetings,
Cynthia