Right from the top I need to tell you that I want to be Bernadette Ahrens when I grow up. I want to be able to carry on a deep discussion while I have my hand deep inside a chicken ripping out its insides. I want to be able to laugh at a joke whilst lopping off a chickens head. I want to be sweet and helpful enough to drive 25 miles at 6 in the morning to do some of the grittiest work ever and smile the whole time. This woman is a gem extraordinaire!! Here we are with the last 3 chickens getting ready to chop off their heads (a bit too graphic for you? you shoulda' been here if you wanna' see graphic...read on...). This is the END of the butchering and we are still smiling! 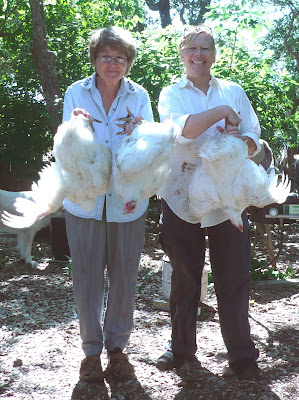 Now this picture was taken while the chicken in Bernadette's right hand was beating the hell out of her with its wing. She was saying, "Ow!" and laughing at the same time. She kept commenting that my chickens were huge, "You could've butchered these weeks ago..." This afternoon, when I packaged them up for the freezer (they have to chill for a few hours first) I had the opportunity to weigh each of them and WHOA! four of them were almost 7 lbs. each! The smallest was 4 1/2 lbs, and the remainder were between 5 and 6 lbs. Them's some BIG chickens! That's about 65 lbs. of chicken in the freezer, not counting the livers (which were stunningly beautiful...can I describe chicken livers that way? Uhhh, just did...), the hearts, the necks and the feet. Yes, the feet. Now the feet are a story in themselves. This was probably my favorite part of the butchering process. Look at this photo: 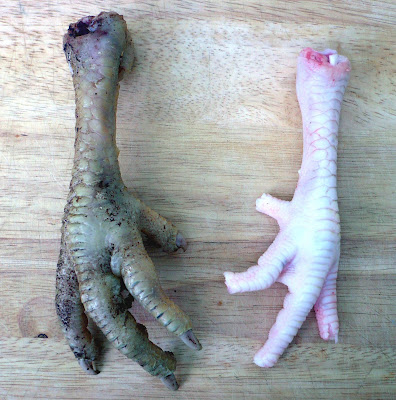 The foot on the left is horror movie material. Creeepy! But dip it in gently simmering water for 30 seconds, clip off the toenails (well, obviously it is more like clip off the first joint INCLUDING the toenail) and then PEEL off the outer yellowish covering and you get the pristine foot on the right. And the peeling process is like peeling out of a skin tight spandex shirt. No kidding! It is so cool and if I had been delegated to simply processing the 22 feet, I would've been a happy girl, but noooooo, I had to take part in the whole grisly ordeal. The June 1st massacre is how it will be remembered around here, let me tell you. And to think Scott didn't want chicken for dinner tonight! Why, you may ask, do I want 22 chicken feet in my freezer? Didn't you ever have a grandma make you real chicken soup? When I was a kid you could buy chicken feet at the market (and they looked like the foot on the right). It's what makes chicken soup a delectable deep yellow color and gives it the perfect flavor. I feel rich having all those chicken feet in the freezer! But in the name of full disclosure I have to admit that there are only 21 chicken feet in the freezer as the one on the left showed up after the fact. Like it got OVERLOOKED. How you overlook something like that, I can't imagine, but in the giddyness of the morning, it never got processed and then it was too late. We have other plans for it, but I can't say here what those plans are. So one more picture for you. If you have a weak stomach, you might want to end here and go back to Facebook or the weather.com page or something. This is a picture of Bernadette (the Saint) and I plucking the chickens. See those feet? Whew! Ug-u-ly (as my grand daughter Natalie says)! 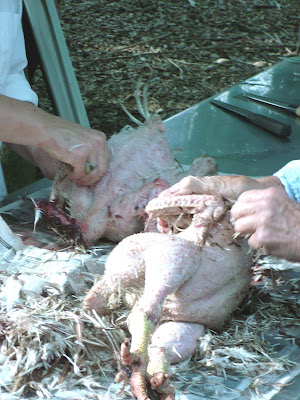 I have 2 pictures of us plucking, this is the close up (I know you are thanking me for that). In this other picture we don't look too happy, but believe me we are ecstatic, just concentrating REAL HARD! 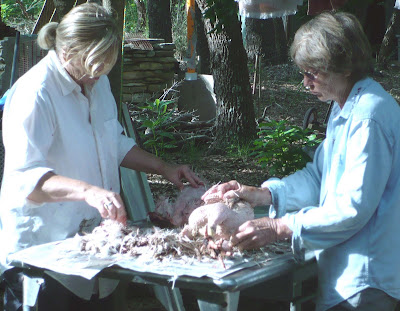 Plucking was my second favorite job. Chopping the heads off and digging out the insides were my least favorite. I had to turn my head when the axe hit the chicken. And I was HOLDING the chicken. Could've been a disaster there, huh? But Scott (the Great Axe Wielder) was paying close attention as he swung that axe, although I could tell he wasn't crazy about that being his job either. Initially, we were going to put the chickens in a cooler, close the lid and pump the cooler full of CO2 through the drain hole, which would have made them pass out before suffocating them (just for the record, this is not the way I want to go). Seemed more humane, but the cooler we had was too big and the smaller coolers didn't have drain holes and the only cooler that MIGHT have worked was in Lily's car at the Kerrville Folk Festival. Plan B was The Axe. After they got the axe, we had to dip them for about 30 seconds in simmering water. This allows one to pluck all the feathers out fairly easily. I mean they just pull off. Easy, yes. Fast, no. Chickens have LOTS of feathers and when they are wet they stick to everything! Dipping a chicken: 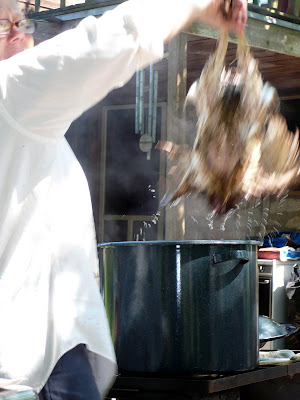 Scott wanted nothing to do with the plucking. He was all for the gutting, but no plucking for him. Can't account for taste, I guess. I learned so much today and after it was over and the mess was all cleaned up and the birds were "chillin" in the fridge (I guess there's not much else to do but "chill" when you have no head and no feet and your insides are gone!) and I was lying on the bed after a shower feeling like I had just come back from war, I couldn't believe it was all done. It seemed pretty easy overall. That, of course, is after the fact. It reminds me so much of having a baby. While in the throes of labor, it is easy to think, "I will never do this again...in fact I will never have sex again in case this happens by mistake...", but then an hour after the birth you cannot remember the pain or the freak out you had earlier. It's just a feeling of, "Wow! That was wild! And look what I have for all that pain and stress! A freezer full of free range chickens!" And that, my friend, is that.

GROSS! Remind me not to come to your house next time your having chicken dinner. Mom! what have you come to? Chicken is not that expensive, really, ill pick you up some next time im at the store so you dont have to go through that ordeal again! And i dont care how yellow and yummy your chicken stock is, i DO NOT want to see a nasty chicken foot floating around in my soup! GROSS,GROSS, GROSS!!

But Marta, this (or a very similar, but perhaps even more gross process) is what all store-bought chickens go through as well. If you eat meat, it's only fair that you experience this reality at least once. :-) At least these chickens had healthy, happy chicken-lives for their short existence.

As for the feet, the Chinese have a really tasty way of barbecuing them...