Sunshine! Finally we've entered a stretch of calm, cloudless days and warm temperatures and every morning the beach beckons. I've found it hard to resist...yesterday my sister Doreen (who is here until mid July) and I spent most of the day there and it was glorious. There was little wind and the sun felt blazing hot. But today I feel the need to lock in here at home, wash and hang out sheets, make seaweed bread, thin the spinach and cilantro in my tiny container garden. And take every opportunity to sit outside on the front bench (Doreen and I have been eating our breakfast out there most mornings), bask in the sun and listen for the sound of the corn crake, a rather rare bird that inhabits the island. Part of me really misses the solitude of winter here. There were hardly any visitors and the village seemed so quiet. It is bittersweet for me that tourist season has hit the island. It is still in the beginning stages, but we've had a few days when all the B&B's were full. Almost 45 walkers just disembarked the ferry and mowers and construction noises fill the background. It feels alive and vital now and everyone is drawn outside.
Early March brought a snowstorm the likes of which hadn't been seen on the island in over three decades. It was exciting to wake up that morning and see my yard covered in snow with it still coming down pretty heavily. I waited until the next day to walk the loop and I was glad I did as some of the drifts on the northwest side of the island were up to my thighs. I followed the tracks of Eamon's quad where he had been up earlier to check on his sheep. It was so beautiful and changed the island into a icy wonderland. 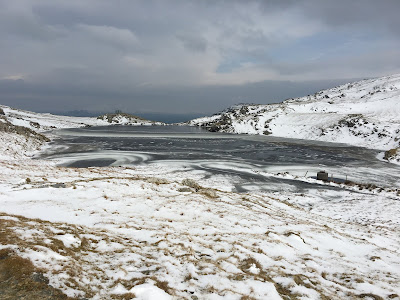 The lake was still partially iced over the day after the storm. 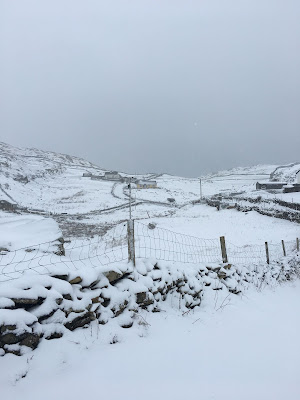 A short walk around the village while it was still snowing was so picturesque!
St. Patrick's Day saw a big celebration complete with a parade from the Harbour up to the Club. The two school kids headed up the parade with a banner and all manner of floats followed. There was a big meal in the Club and the craic (the Gaelic word for great fun) went on well into the evening.
House guests have been sporadic up till now. My youngest daughter Lily came in late March for two weeks. I met her at the airport in Dublin and we traveled directly to Belfast for three days to play tourist. We walked along the River Lagan to the Titanic Museum and spent a day on a Game of Thrones tour. I've never seen the show, but she's a big fan and I was surprised what an entertaining day it was in spite of being wickedly cold and blustery. Our tour guide was an actor on the show (he is a body double for one of the main characters and also an extra) so he was full of interesting tidbits about the production as we stopped at multiple spots where the show was filmed. We walked a trail to a 66 foot long rope bridge suspended 98 feet above jagged rocks in a churning ocean. 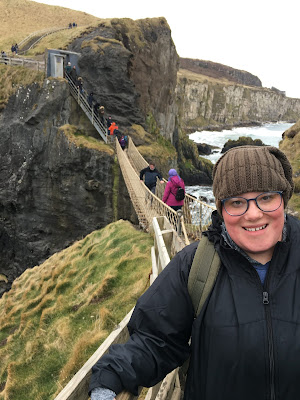 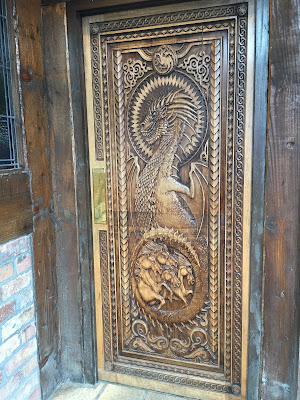 The carved door to the pub where ate lunch. It even had a Game of Thrones room with a throne!
Belfast is clean and easy to get around although I found it expensive as the dollar is worth less against the pound than the euro. We made it back to the island on Easter morning and Lily and I had a great week-with my 60th birthday on Tuesday (there was a lovely and lively surprise party at Mary Catherine's with wonderful food and friends) and lots of island walks. 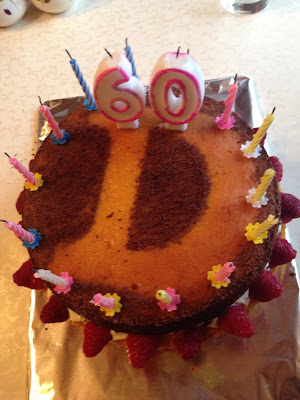 My birthday cake made by my sweet neighbor and the island nurse, Maggie.
Lily's visit ended too soon and I took the train to Dublin to see her off. When I returned to the island, lambing was in full swing. It made walks all the sweeter to watch the babies running and playing in the fields.
*(My computer crashed here, so I am coming back to this post a few weeks later.)*
I had a month before my friend of 35 years, Peggy, arrived. She'd sent me emails from Texas with a list of things she thought we could do...looking at her two weeks here as a kind of retreat. I didn't respond because I didn't feel I could explain what island life was really like. She just had to experience it. We talked late into the nights with steaming cups of tea and roaring fires. We took walks around the loop and to the cliffs. On a beautiful Mother's Day (American Mother's Day which is a different day that Ireland's Mother's Day) we walked the far east side of the island, a three hour hike where we watched waves crashing into the rocky shore and visited the great sinkhole, a sight which fascinates me no matter how many times I go there. It's maybe 40 feet across and you can't see the bottom. It was fenced years ago to keep sheep from falling in. I've heard some fantastical stories about it, the most recent being from Mary Jo who said it goes all the way down to the sea. It's one of my favorite walks on the island and the best place for an afternoon of contemplation as it is so quiet and secluded. 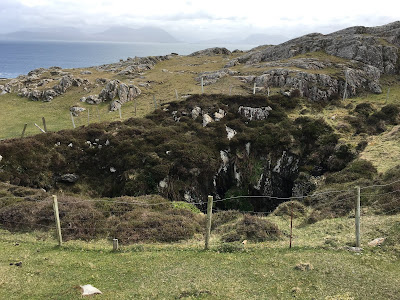 The Great Sinkhole
After Peggy's first week here, I brought up the email with all the plans. She just nodded and said "I had no idea..." At the beginning of Peggy's second week here, my sister Doreen arrived and I had three ten hour work days ahead of me helping out in the Club so Doreen and Peggy took walks and hung out getting to know each other. They are so alike and so different both. Their philosophy on life is almost identical, their energy levels are exactly opposite, but they got on famously. We all traveled together to Tullamore for an overnight stay before Peggy headed to Dublin on the morning train to catch her flight back to Austin and Doreen and I headed back to Westport and the ferry to the island.
Last Saturday was the 25 Year Anniversary of the Club opening. There was a big celebration with over 100 people showing up to the Club for a day of food and fun. There was live music from area musicians during the day (of which a few were Islanders) and some a cappella Irish ballads sung and even a recitation of a poem by my neighbor Jack. It was lovely to see everyone dressed in their finest enjoying the best the island has to offer.
So now it's just Doreen and I for a few weeks until my oldest daughter Sage and her husband and two kids get here. I am anxious to squeeze my grandbabies and show them the wonder that is Inishturk. They'll only be on the island for five days and I feel like I have two weeks worth of things I want to show them, so I may have to temper my enthusiasm and let them just relax and enjoy the time off. Less than a week after Sage and her family leave, Natalie, my oldest grand daughter will once again spend the summer here. There is nothing better than being with the grandkids. They shine a light on the true joys in life. Through their eyes, I get to see things anew.
I've been thinking a lot about my life here and have come to realize that these people, this place, brings out the best in me. I have had moments here that I hold up as some of the happiest times of my life. I feel accepted and appreciated and I remain eager and grateful to be a part of this community. I recognize this feeling from my work cooking for Mr. Parker, my beloved boss who passed away in the summer of 2016. He had a faith in me that made me feel invincible in some ways, and I worked hard to become worthy of that faith. It is different here because these folks are not my employers, but people I choose to live among. Having people believe in me makes me want to be a better person and, living here, I am given many opportunities to practice being that person. I'm deriving great joy in that practice. So it is bittersweet (again, that word) to think about not being here. I wish my family was just a short ferry ride away on the mainland instead of a long plane trip across the ocean and then halfway more across the expanse of America.
So for now, I have an island summer ahead of me, full of children and beach times, long walks and sunshine, good friends and laughter. We never know what lies ahead, so it seems a worthwhile endeavor to strive to be happy, to enjoy every moment the best we can. Really, what more could we ask for?

Ah, it's bittersweet reading this since I'm now no longer there with you. What you say about certain situations bringing out the best in us is, for me, what it's all about. Finding ours and helping to create it for others. And that you do in spades, Diane.

Hi Diane! You have been on my mind for weeks and had no idea you'd left the country! I had your number until my phone crashed and I lost all my contacts. I am jones'n for an almond cake and wanting some lovely face cream! Ha! You area brave adventurer and I so admire you. I shall look forward to your blog posts in the future....don't wait too long! The photos are breathtaking!

Diane! Would love to hear from you!

You've been away from your wonderful writing too long!! Haha Jo