NOTES FROM THE ISLAND

Hard to imagine that summer is almost over, but here on Inishturk, it is palpable. The days are getting shorter - no more dusk at 10 and dawn at 5 - and the breeze is out of the north from time to time. Still it is pleasantly warm at day, low 60's (this makes me laugh seeing the 100 degree temps in Texas) and when the sun comes out I can be fooled into believing summer will last forever.
I had some friends visit from Camp Verde and Kerrville. Maria worked with me at Cypress Springs where I was the cook for almost 15 years. Her brother, Jesus, worked there also, although not in the kitchen. His girlfriend, Destiny, joined them for their week in Ireland with their first stop in Inishturk. Maria had just returned from a 2 week National Geographic trip to Italy and Greece - she was in big time travel mode before college starts up for this recent graduate (2nd in her class!). They were great fun and we hiked both trails on the island and stayed up late talking and laughing each night. 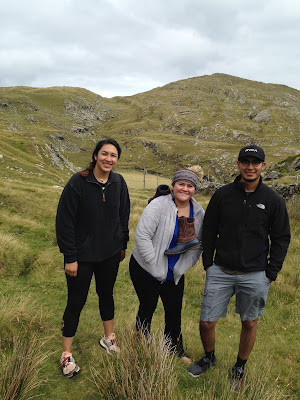 Maria, Destiny and Jesus
A few days after they arrived Turkfest commenced, so they were on their own as I was helping in the club kitchen. 150 Irish hipsters invaded the island and brought music and new energy to the calm isolation that keeps me here. It was intense, but for the most part, fun. I was here for it last year, so I knew what to expect. Nevertheless, I was glad when Monday came and the island was somewhat back to normal. Tuesday brought hoards again as it was the annual pilgrimage to Caher Island. Caher is a small uninhabited island which lies about halfway between Inishturk and the mainland. It was once the site of a monastery (7th century) and there are fine examples of medieval stone crosses. August 15th is the Feast of the Assumption and the day that hundreds of people brave the treacherous waters around Caher to experience Mass at the ruins of the church. There is no pier, so pilgrims must clamber up the rocky shore after exiting the boats. For many people this pilgrimage is part of the climb up Croagh Patrick on the mainland on the last Sunday in July. After Mass at Caher the folks board the boats again and head to Inishturk for food and fellowship. Once again, I was sequestered in the kitchen, avoiding the crowds. By evening, the island was blissfully quiet again. A wedding was scheduled for Friday of that week, but the forecast was brutal so the weekend celebration was moved to the mainland. From Thursday on, the island was practically deserted, with less than half its average population. It was lovely walking the island and not encountering another soul. 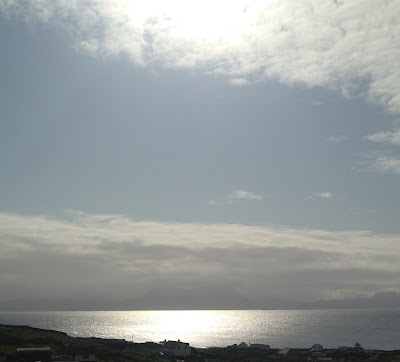 Peace
The island tends to attract WWOOFers, which is how I found it last year, and some integrate into the community. My dear friend Mary Catherine has had a few this summer and, since I spend quite a bit of time at her house, I get to know them well. Earlier in the summer Mary C hosted Maria from southern Germany. She lives just 20 minutes from my friends Tom and Cynthia in Simmerberg, Germany! After Maria left, Claudia arrived. Claudia is from the northwest coast of Italy and her month on the island flew by. We worked side by side at island functions (mostly in The Club kitchen or at Mary C's busy guesthouse) and occasionally got to relax at the restaurant for a meal or take a hike on the islands trails. She was a remarkable young woman and I was really sad to see her go. WWOOFing is an incredible way to see the world and I highly recommend traveling that way - an opportunity to know a country by living and working with a family there. 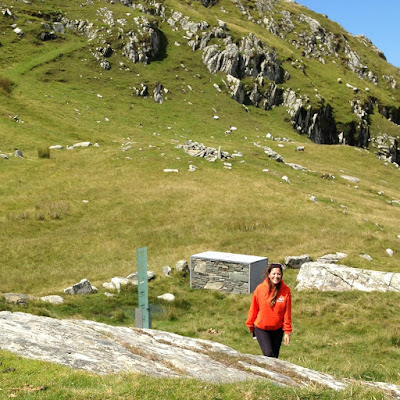 Claudia at Tale of the Tongs
The blackberries which grow all over the island are just beginning to ripen. Days of rain and then sun have them turning from green to red and finally black. When they lose their glossy sheen they are ready to pick and with just a touch, they fall into my hand. 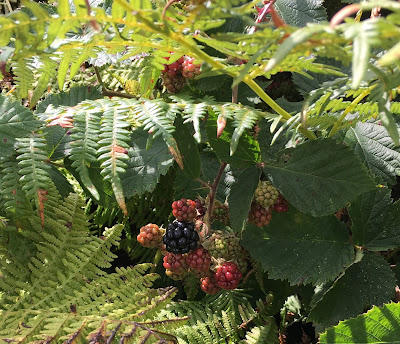 They make for a tasty snack while on walks. An edible treasure hunt.
On Monday, the 21st - the day of the Eclipse - the weather was wicked, with heavy rain most all day. The sky was steely grey and the downpours flowed down the mountain, creating waterfalls off the cliffs into the harbour. Days later, there were still rushing streams coursing through mountainside gullies. On Curraun Beach, a trickle of fresh water that always flows from mountain to ocean became a cascade that carved curving patterns in the sand.
My friend Kathleen sent me a copy of Big Magic by Elizabeth Gilbert (of Eat, Pray, Love fame). Although it's been on my Kindle for over a year - I mentioned it in my New Years post and it's included in my Books By My Bedside list - I have yet to finish it. After picking up my package from the Post Office (open from 12-1 on Tuesdays and Fridays) I walked to the Community Center (affectionately called The Club which houses the pub, restaurant and small shop) and sat on the empty deck overlooking the ocean. Although I truly love the idea of books on Kindle for the ease of reading while traveling, holding that beloved book in my hands and feeling the pages felt precious. It's just a different experience. 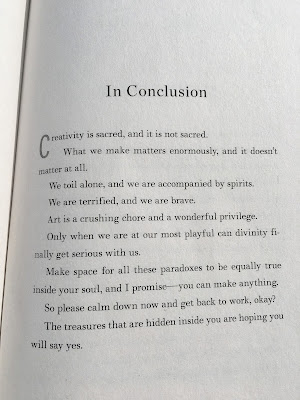 The last page of Big Magic. Indeed.
After a quick visit from my artist friend Jeannette next week, my mother and three sisters descend on Inishturk. At 83, my mom hasn't traveled for years and it took a bit of coaxing from all of us girls to convince her to make the trip. But after she agreed, it was full steam ahead! I am beyond excited to show them the island and introduce them to the unique group of folks that make up its population. The island may never be the same...
Well, my morning is slipping away and the tide is going out. I'm going to meet my neighbor Pete at low tide to harvest some carraigin seaweed, also known as carrageen moss, to dry for winter use. Used to set liquids (like gelatin), it is considered a remedy for coughs, sore throats and chest colds. I gathered sea lettuce and sea grass yesterday, dried then crumbled it to make seaweed bread later this afternoon. I couldn't help but munch on some after drying it. So tasty.
September's almost here! Smile!

Yes, as Liz Gilbert says, learning to live with and embrace paradox makes life so much richer. It also relieves the stress of having to make things all line up on the "correct" side or of making one aspect "good" and the other "bad".

I really appreciate getting to see glimpses of your life. I was under the impression that you would go there and be mostly alone and doing mostly nothing for your time there. It turns out that you're nearly as busy there as you were back here. Well, maybe not quite...

Saw your comment on my blog, and see you are having a life of adventure. I am so glad to see it. I am having interesting days by having air bnb guests in my home. Ta! Miriam