The Puffins are back!
Tuesday afternoon Helen showed me a photo on her phone from a walk she'd taken that morning. We were outside and the bright sunlight made it hard to see the pic, but she was excited and it was infectious. "Come walk with me in the morning! If we go early, I think the viewing will be better!" I agreed to be at her house at 9:30, not knowing exactly what we'd be seeing on our walk. I didn't know Helen well, but I wanted to and this seemed the perfect opportunity.
The next morning at exactly 9:30 I knocked on her door and then let myself in, the island way. She bustled down the hallway to meet me and then turned back to the kitchen to apply sunscreen. In a minute we were in the car heading out. We drove past the pub and the football pitch and turned in at the water plant. She shut off the engine and grabbed her binoculars. We crossed the road and headed up what I would describe as a mountain, it was certainly more than a hill! "We'll talk when we get to the top..." she told me and I knew it was because we'd be so winded climbing. The climb was like doing lunges, one after another. The ground was soft and spongy, but not wet. More than halfway up was a rock outcropping and she stopped. "Let's sit for a bit." It was then I noticed she was barefoot. Helen is in her late 60's and retired from being a midwife about 3 years ago. I only visited her once last year and I remember being intrigued by the batch of kefir on her windowsill and her lush garden. She's barely as tall as my shoulder and she moves fast and with intent. We didn't sit long - she was on a schedule as her husband Jack was bringing a guest to the island from the mainland. Back to our lunges, we finally crested the top of the hill and walked through a grassy meadow with tiny wildflowers. The ground was spongier yet up here and in some places damp. There were a few freshwater ponds and we crossed a small babbling creek. She told me names of a number of wildflowers and the ones she didn't know, she'd pick and have me put it in my pocket to identify when we got back. I knew we were walking to the overlook on the west side of the island. When we got to the wooden fence that acts as a barricade to the treacherous cliffs beyond, she took the binoculars and started scanning the cliffs. "There!" she said, "There on the grass above the rock, look!" She handed me the binoculars and said, "Puffins!" It took me a while, but I was finally able to distinguish them from the hundreds of seagulls perched on the side of the cliffs. Their orange legs and their coal black backs and white bellies made them stand out. They come to the island every Spring to breed. There is a large historical decline of Puffins in Europe, so it is a thrill when they make it back to the island every year. Helen commented that they made her feel so peaceful and I knew exactly what she meant. Watching them through the binoculars I felt my heart rate slow down from the vigorous walk and a calm settle over me. I wish I could post a photo of them, but they were quite far away. I even tried to take a pic through the binoculars, but it didn't work (is that even possible?). 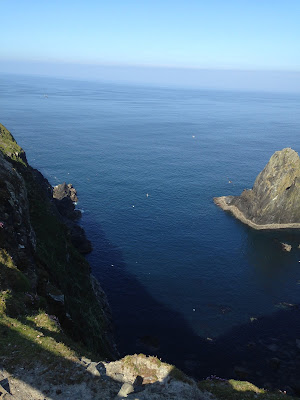 The white dots are seagulls flying around. The Puffins were on the lower cliffs on the left hand side. I would see what I thought were Puffins on another rock and get all excited, "Look, there's a whole bunch of them over there!" She'd take the binoculars from me, look and say no, those are ... (another island bird) - and point out that, although they were black and white, they didn't have orange legs and see how they were not as fat as the Puffins? She was patient with my enthusiasm. She told me that once she was lying on her belly at the edge of the cliff painting the scenery and a wind came and Poof! all her paintbrushes flew off the cliff edge into the sea! At one point she turned to the sea behind us, off the southern coast and pointed out Jack's boat heading in. It was a tiny speck in the ocean, but it would take us a while to get back to the car. We needed to head out. Before we left the cliff there was one thing I needed to do first. Leaning against the sturdy wooden fence, I took off my socks and shoes for the long walk back.
Posted by diane at 1:54 PM

Love!
And love that she is wearing her sunscreen....are you???

Going hiking barefoot??!! I have to come and try this. Never in Texas.

YES! I will be so happy to walk barefoot and not worry about sand spurs or fire ants! Puffins! How awesome, more and more excited every day! Thank you....