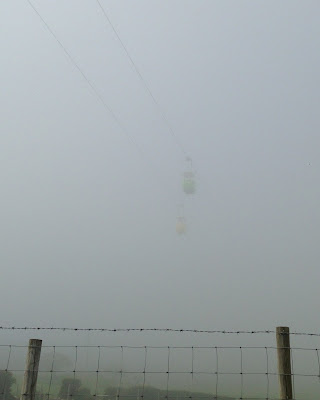 I finished my hike to the top all the while in a thick, damp fog. At the summit, the promised views were shrouded in a white blanket. I took a different route down the mountain and it was magical to be walking that mountain as in a mist from another time. When I got back to town everyone was talking about the fog that had descended - I sat on a bench by the old church and watched the fog continue to roll through town. Apparently it was an anomaly and I was pleased I got to experience it, especially while on the Great Orme.
From Llandudno, I took a train to Holyhead on the island of Anglesey where I caught a three hour ferry to Dublin. Once at the Dublin port, I boarded a bus to Ha'penny Bridge just a block from my hostel. No passport control, no security, just off the ferry and onto the bus. This surprised me as Ireland is not in the U.K. (Northern Ireland is part of the U.K.), but it is part of the European Union. My hostel in Dublin was a beehive, a young and active hostel. Not my favorite kind, but my small three bunk room was comfortable with two nice roommates. They moved me the next night to an eight bed room, and after a day walking around Dublin (which included a visit to the Guinness Brewery and getting caught in a big rainstorm), I was grateful to find no one else in the room. I was able to dry my clothes and catch up on mail and the news. As I was just about ready to go to bed, a young woman walked in. We started talking and I could tell she was American. She was from San Antonio on a month long work study trip from UTSA. She was heading to London the next day, but had stopped in Dublin because she'd never been. We marvelled at the serendipity of our meeting. My train the next morning to Wexford on the southeastern coast of Ireland was a slow, sleepy ride. I was looking forward to quiet before a whirlwind two weeks with my friend Kathleen coming over from Texas. I'd booked a B&B in Wexford and it was more upscale than I'd been used to. The hostess, Grainne, (pronounced Gron-ya) reminded me so much of a younger Mrs. Doubtfire, from the Robin Williams movie of the same name. Her full Irish breakfasts are legendary and I've never had so much food for breakfast - and on fine China and silver coffee service, too! I could live on her breakfast porridge with cream and I miss that more than anything. My first night in Wexford, Kathleen texted me that she had ended up in the hospital and was having to cancel her trip. I was sad and concerned. We've kept in touch and she seems much better, but I miss her presence all the same. With two weeks to fill, I turned to the WWOOFing (WWOOF=World Wide Opportunities on Organic Farms) site and after one night in Dublin, I'll head west to WWOOF for a week or two on the tiny island of Inishturk. Three miles long and one mile wide with a population of about fifty people, I'll be helping out on a small sheep farm. I'm looking forward to the one on one with the owner, Mary. After my time there, I may head back to the mainland to help with an organic garden behind a seafood restaurant on the coast or gardens at a holistic retreat center near the Cliffs of Moher. The WWOOFing opportunities are many and I'll be working my last two months in Ireland. I'm heading back to the States in mid August, but will be on the East Coast for a number of weeks before I head to Texas. Knowing I am so close to the end of this trip is bittersweet. I miss my family terribly, but yet it's hard to imagine being settled back at home. I'm enjoying being a nomad with all its uncertainty, it will be strange to have routine again! Yet it's one of the things I miss the most - hanging clothes on the clothesline, taking a walk with my dog, time with my grandkids. The little routine things I hope I never take for granted again. But for now there's a train to catch and an island to discover and more adventures awaiting. I'll leave you with this quote: "We travel not to escape life, but for life not to escape us." ~Anonymous
Posted by diane at 1:31 PM

Beautiful...
I cannot wait to see you again! Until then, safe travels - I love you❤.
Dawn

I enjoy your continued journey and the others who have experienced the Diane Potter spirit. I send healing energy to Kathleen and feel the disappointment, Your are an inspiration for all of who have tickle-foot. Best to your steps wherever they wander, Elin

Great blog created by you. I read your blog, its best and useful information. You have done a good work. Thanks.houses for sale in thrissur