Our first view of Finland from the plane. 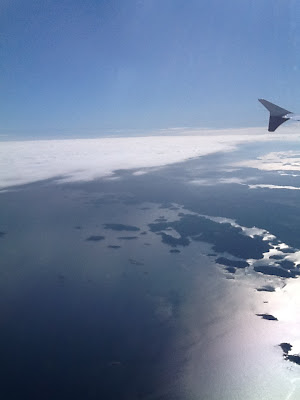 The day before I left for vacation I told a neighbor that it would take me three weeks to learn to relax and one week to enjoy it. If the rest of this trip is anything like today, I have nothing to worry about. Of course, when I was awakened at 3 a.m. because of light streaming through the window, I had my doubts. We experienced about 3 hours of twilight last night...not darkness, but enough light that we could sit on the deck and read a book. Already sleep deprived from the flight over, this did not make me hopeful about my energy level for the day. The Finnish people are the biggest coffee drinkers in the world and now I know why. Doreen and I immediately fell into step with them and in addition to our morning ration, we supplemented throughout the day. By 8:15 we were at the bus stop beside the hotel and just minutes later caught our ride to downtown Helsinki. First stop, the train station to get our tickets for our trip to Tampere tomorrow, about 2 hours north of Helsinki. There we will spend a few days with our new found cousins. 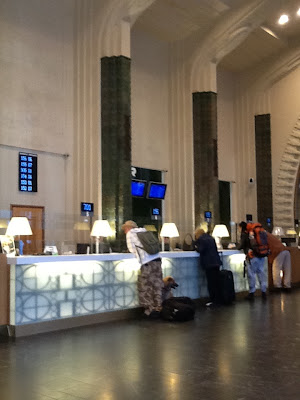 Train station in Helsinki. So practical and easy to navigate! And most all the clerks speak English!
After procuring our tickets we took off to explore the city on foot. I had a rough map with suggestions of things to do written in the margins and we headed out to look for the open air Market by the ferry docks. I knew we were heading in the right direction because a young Finnish woman (studying for her PhD in linguistics at the local University) who spoke excellent English must've thought we looked pitiful standing on the street corner with a map. She walked with us for a few blocks, telling us of Finnish history and then we parted ways with her pointing down the road to our destination.  We passed a large church up on a hill and stopped to take pics. 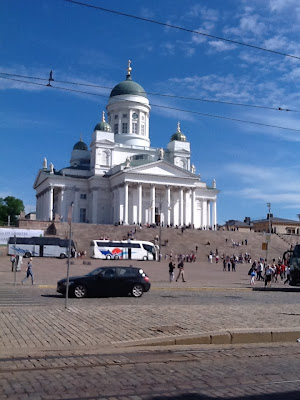 After cresting the hill and turning a corner, the Market was before us with over a hundred booths and beyond that ships docked in the azure water.
The first booths at the Market were fruit vendors and the fragrance of fresh strawberries was everywhere. Most of the fruit was from Spain (there was snow on the ground a month ago, so it is a little early in the season for veggies and fruit here) but there were some very small strawberries from Finland. They had huge blueberries, cherries and apricots-all from Spain. Most all the produce was marked with country of origin. Further down were vegetables-tiny cauliflowers the size of my fist, fennel bulbs, zucchini, fat white asparagus, even tomatoes. And then there were the potatoes, bin after bin filled with piles of the tiniest, most uniform potatoes I've ever seen, still covered in dirt and sold by the kilo. Even though we had a small kitchenette in our hotel room complete with a two burner stovetop, there were no pots or pans ( do Finns travel with cookware? Doubtful...). How I wanted to buy a half kilo and boil them up and coat them in butter and dill! We saw wonderful Finnish hand crafts; lots of felted wool hats and scarves (the most unusual ones from an exotic looking woman from Santa Barbara who married a Finnish man and now makes her home in Helsinki), carved birch coasters and kitchen utensils, elegant leather gloves, pottery the colors of the ocean and so much more. The food booths all served variations of the same meal-roasted salmon, vendace (small fish similar to smelts which are rolled in rye flour and fried), the tiny new potatoes dripping with butter and dill (if I couldn't cook them at least I could eat them!), and mixed vegetables. The variation we chose included a bit of squid rings also. 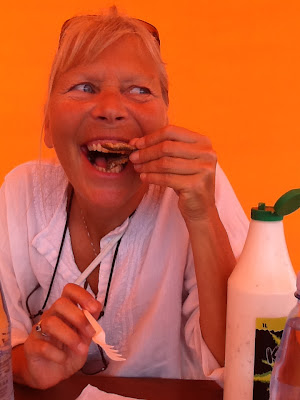 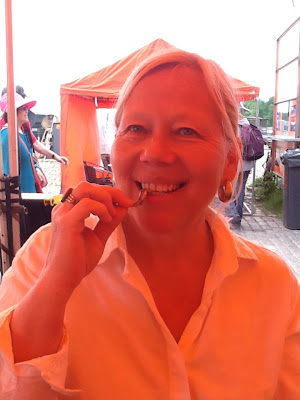 We sat at a picnic table in a huge orange tent which gave our skin a healthy glow. Doreen and I thoroughly enjoyed our meal!
Posted by diane at 11:50 PM