For all my years of gardening in Texas, I've maintained that the garden looks picture perfect for about 15 minutes sometime in early April. Well, this year it looks like it may be early February or maybe the 15 minutes will stretch into a few months! After last years weather -blistering hot temps day after day for months and no rain at all- this year has been a gift. Over 5 inches of rain in December, 2.5 in January and here we are the first week in February and I've already registered just under 2 inches. Amazing and nothing short of magnificent as far as the garden is concerned! I can't keep up with all the greens: 5 kinds of lettuce, mustard spinach, regular spinach, 2 kinds of kale, chard, broccoli raab, beet greens, cilantro and arugula. The cauliflower and broccoli are putting out nice fat heads along with scrumptious leaves. The sugar snap peas that just pushed out of the ground a week and a half ago are growing at record speed. Flowers that haven't been in the garden for years -poppies, larkspur, native hollyhocks- have shown up and are growing like they're on steroids. It's all incredibly encouraging. And a good life lesson for me...sometimes things just need to sit in the soil and wait for the perfect opportunity to burst forth. As good as our intentions may be, if the conditions aren't right, our seeds (and dreams) will not come to fruition. Patience, patience, patience. Not my strong point. 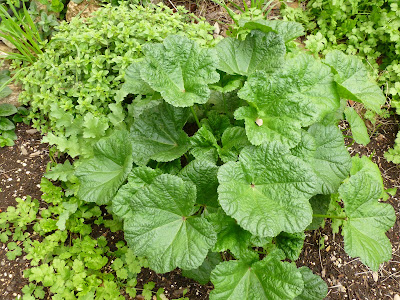 A native hollyhock flanked by cilantro and oregano. 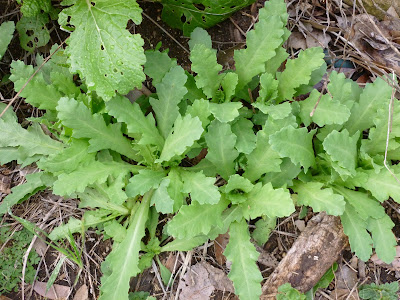 Poppies are everywhere...in the beds, in the paths and between cracks in boards. What a riot of color the garden will be in another month! 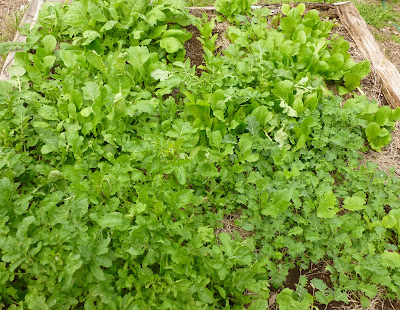 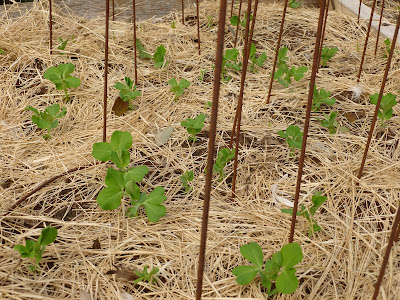 Sugar snap peas ready to climb the lampshade frames. I've used this technique the last two years and it worked great. No sense reinventing the wheel... 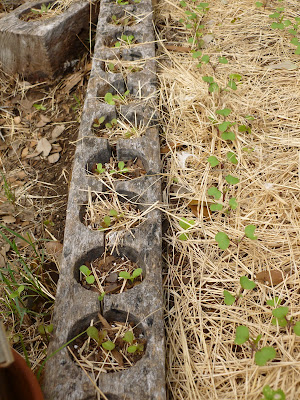 I have a few of these old Mexican sugar molds (ever seen piloncillo -Mexican cone sugar-at the grocery store? It used to be formed in molds like these-maybe still is...). I used them to hold up the ends of a bed. This year, I filled them with soil and seeded them with just a few seeds of various kinds of lettuce. I've thinned them down to one or two seedlings per hole. Since lettuce have a fairly small root system, I think each hole will hold one head of lettuce. These pics were taken a week ago. The lettuce is doing real well so far. I'm hoping the storm due this evening doesn't bring hail! 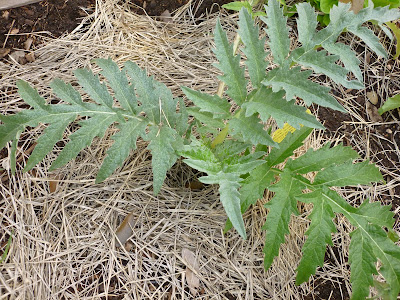 This is a cardoon. It is an interesting Mediterranean vegetable. You pick the leaves -they get very large- and strip off the leafy part so all that remains is the stalk. You then cook and eat the stalk. Very tasty. However, it looks VERY much like an artichoke (below)...they are related, but different. 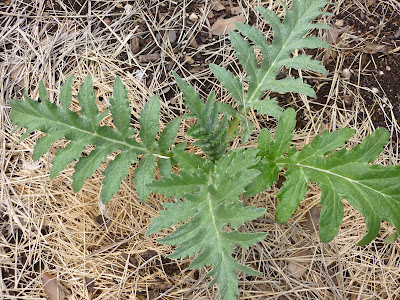 You can see small differences in the two...slightly more rounded ends on the leaves of the artichoke and the area surrounding the stalk is also wider. But I put them far apart in the garden so I wouldn't get them mixed up. Artichokes are perennials and you'll have them in the garden for many years if you (and the weather) treat them right. My last batch of artichoke plants bit the dust last year when I struggled to keep ANYTHING alive in the garden. I planted 3 new plants this year. 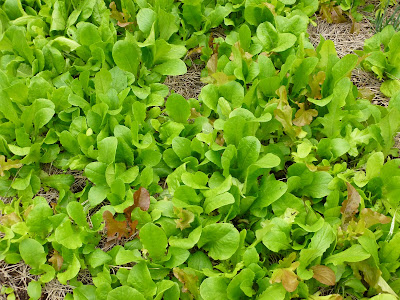 A bed of mixed lettuces, although mostly Romaine. My aversion to neat rows -or maybe just orderliness in general- is apparent here, but it works for me. I scatter seed and as they come up I pick whole plants for salads to create more room. As they get  bigger, I leave the plant in the soil and just snip off outer leaves to eat. 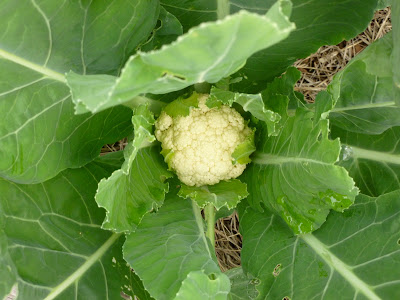 And of course, cauliflower and broccoli. The weather has been warmer than they like, so some worm is nibbling the cauliflower. But their appetites (or stomachs) are small, so they leave pretty good sized heads for us. The leaves are great shredded and sauteed in olive oil with lots of garlic or added to soups.
I am ever hopeful that this wet winter we've been experiencing will result in some morel mushrooms. It would help if it was a bit colder, but I can't help but think the moisture will result in a crop this year.
Happy Gardening in 2012!
Posted by diane at 11:58 AM